Cover crops have become a key ally in the Great Lakes region’s war against nutrient-enriched runoff that grows algae in the lakes and its tributaries.

But so have one of soil’s most ancient and mysterious creatures: earthworms.

The dynamics between earthworms and an important layer of soil just beneath the surface is one of nature’s most fascinating out-of-sight, out-of-mind stories of nesting behaviors that make near-shore land more fertile and productive while also providing more passageways for water to seep in. That helps reduce runoff.

To learn more about the beauty of earthworms, I yield to Frank Gibbs, a U.S. Department of Agriculture soil scientist from Findlay, Ohio. I have a hard time believing there are many people more passionate about earthworms.

Frank Gibbs likes to get dirty. Not many other guys would gladly encourage a group of journalists to join him at the bottom of a trench in the searing heat to examine the intricate 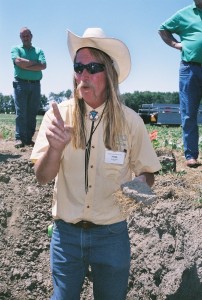 pathways that earthworms create in the soil, as he did one day this summer with a group of writers on a Maumee River watershed expedition organized by the Montana-based Institutes for Journalism and Natural Resources. Gibbs talks like he has a symbiotic relationship with night crawlers.

Scientists have long known that worms play an important role in carrying decayed organic matter on the surface down into the soil. That helps enrich it with nutrients.

More is being learned, though, about how worms also aid with no-till farming practices.

As Gibbs explained, plant roots follow earthworms down three feet or more below the surface. That activity also helps water penetrate more deeply. Even with this summer’s drought, undisturbed land where worms are plentiful in northwest Ohio retained a surprising amount of moisture.

One thing a lot of us probably have never considered is just how earthworms don’t like to wander off too far.

They prefer to nest in the same general vicinity, within a matter of feet of their comfort zone.
Yes, earthworms are real homebodies. If they have adequate cover on the surface and enough decayed organic matter to keep them happy, they’ll stay put.

They typically need three to five years to become established. Once that happens, their magic beneath the land’s surface pays dividends. Their work does more than just cover crops alone. The two work in tandem.

In other words, more cover crops and less plowing can lead to more earthworms which greatly enhance soil quality. And, together, the cover crops can keep more water on the land, thereby reducing runoff of phosphorus and other nutrients that cause large algae blooms.

This summer was relatively algae-free, but that is largely attributed to the drought. Several Great Lakes scientists said there was certainly enough heat to produce a third consecutive record-setting algae bloom if this year’s runoff had come close to what it was in 2010 and 2011.

Jeff Reutter, director of Ohio State University’s Stone Laboratory on Gibraltar Island, near Put-in-Bay, said this summer’s lack of algae should reinforce the need to control all sources of runoff, especially that which is produced by agriculture. Runoff from farms and other non-point sources are much harder to control that what comes out of sewage plants or factories.

The Maumee and Sandusky river watersheds in northwest Ohio are two of the Great Lakes region’s most important because of their role as western Lake Erie tributaries.

Reutter said those two rivers, as well as others across Ohio, need at least a two-thirds reduction in runoff to keep large algae blooms from forming in western Lake Erie.

Western Lake Erie is the Great Lakes region’s most algae-prone area because of its warmth, shallowness, and complex interactions with near-shore issues over population and land-use.

Lots of work lies ahead for agriculture, as well as sewage-treatment plants and other sources of algae-feeding nutrients.

Cover crops and earthworms will only go so far, but they complement more traditional efforts to keep soil on land, such as buffer strips and tree-lined windbreaks.

They won’t likely stop farmers from plowing their fields, but they can help promote conservation tillage and other lighter agricultural practices, as well as more no-till farming.
If embraced more widely, these practices could help farmers avoid regulations that would curtail their use of fertilizers.

Here’s hoping the benefits of cover crops, earthworms, and more selective plowing of fields — ideally years apart – are more than just anecdotes.
In this video Gibbs explains the value of earthworm activity:

This one shows how smoke blown into drainage tiles emerges from earthworm passageways: