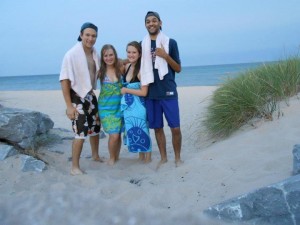 In 18 hours you can drive from Milwaukee to Dallas. If you break a few speed limit laws, you can get from Toledo to Orlando. You can even drive from Detroit to Chicago three times–and still have a few hours to spare.

Or, you can stay close to home and swim in all five Great Lakes in one day. That is exactly what three friends and I did this summer.

I got the idea from a post in the Pure Michigan blog about two women who completed this challenge in May. I knew it was something I had to try.

What the original post neglected to say was how hard planning the trip would be. The phrase, “public beaches on Lake Superior” doesn’t render the best results on Google. I had to be creative. I found a few public beaches using search engines, but I mainly asked my friends and posted cries for help on Twitter. 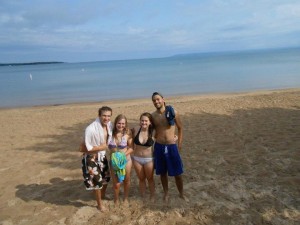 Eventually, I found a public beach on each lake that met all our criteria: They were close together and, most importantly,they were free.

On July 19 we drove to Traverse City and camped overnight. Our Great Lakes adventure began  at 5:30 a.m. the next day at the Lake Michigan Beach Park in Empire, Mich.

We planned to spend 30 minutes at each lake, from the

op for gas and food and make it to Lake Ontario before sunset. Lake Erie was our only nighttime swim and the last one, ending at 11:45 p.m. some 18 hours after the journey started.

I’ve spent my entire life around the Great Lakes, but each dive had a surprise. 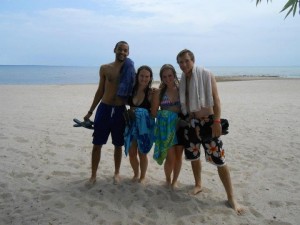 I expected Lake Michigan to be the warmest lake and Lake Superior to be the coldest, but it was the exact opposite. Lake Michigan was frigid–most likely because we were swimming at 5:30 in the morning–and Lake Superior felt like bathwater. The surprises continued: We waded nearly a hundred yards into Lake Huron in Alpena, Mich., and it was still barely deep enough to dive under. Lake Ontario’s Van Wagners beach in Hamilton, Ontario was the rockiest I’d ever seen. And while I’ve grown up swimming in Lake Erie, Until then I had never gone swimming at night.

I expected this trip to simply test how quickly we could jump into one body of water and drive to the next, but it deepened my appreciation for the Great Lakes and the diversity this region offers. The best part was that I’ve only scratched the surface of the area; I haven’t yet explored New York’s Lake Ontario shoreline or Wisconsin’s side of Lake Michigan.

Halfway through the trip, I realized I was head over heels in love with the Great Lakes. 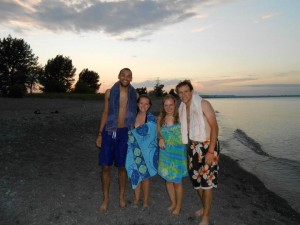 A month and a half later, I found a column written by Patty Birkholz, director of Michigan’s Office of the Great Lakes, on how to be better stewards of the Great Lakes. I thought each idea was valid, but had one question: How can people find a connection with each Great Lake? Even if you’re in the heart of Michigan, you could live more than 260 miles from both Lake Superior and Lake Ontario. A 260-mile drive isn’t exactly a day trip.

Except it was for me. We drove nearly 900 miles.

Our last stop on Lake Erie was at my parents’ cottage at Rondeau Provincial Park, one of two provincial parks in Ontario with privately owned cottages.My family has had cottages thee since the 1920s. 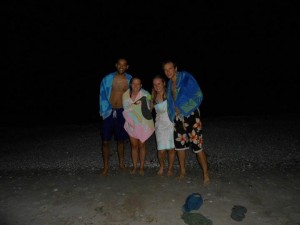 I’ve spent my life around the Great Lakes, but jumping into each one in a span of 18 hours deepened my appreciation for every lake–not just the one I grew up on–and for the region as a whole.

Birkholz calls readers to become more connected with nature, and that’s what I did.

Literally. I got more sand in my bathing suit than I knew what to do with.