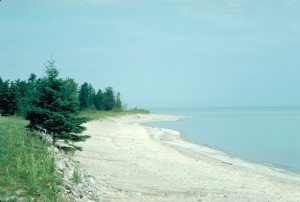 Lake Huron has the most shoreline and is the second largest Great Lake. Yet it gets perhaps the least scientific attention.

That will soon change. Lake Huron is the home of a new long-term research program started this summer by the National Oceanic and Atmospheric Administration’s Great Lakes Environmental Research Laboratory.

From the agency’s base at the Thunder Bay National Marine Sanctuary in Alpena, Mich., scientists are studying water quality, invasive and native species, nutrient levels and physical properties of the lake.

It’s long overdue.  Lake Michigan has been the site of a long-term research program since the 1980s.

Significant changes in the Lake Huron ecosystem are a main focus of the research. A decline of nutrients in the open water is leading to a food shortage for prey fish like salmon. At the same time, fish like walleye and smallmouth bass in the nearshore are increasing.

So are blooms of cladophora, an algae that emits a sewer-like odor as it rots on beaches.

Nutrients, the food web and water quality create the ecosystem of Lake Huron, Vanderploeg said, “but no one really knows how the Great Lakes systems work together.”

Studying the lake may give clues to how to effectively manage it for both water quality and fish production, he said.

Similar studies already done in Lake Michigan will be used to compare the lakes to better understand how they work.

“The reasons for that are not understood yet,” he said.

The effort will research how:

The agency ‘s participation in the 2012 Lake Huron Cooperative Science and Monitoring Initiative is the starting point for the long-term program.

The initiative is a joint effort between the U.S. Environmental Protection Agency’s Great Lakes National Program Office and Environment Canada to study one Great Lake per year. The studies 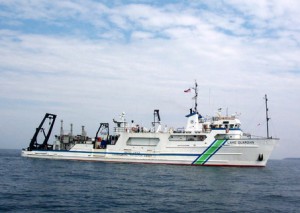 The U.S. EPA’s Lake Guardian is one of the ships traversing Lake Huron this summer gathering data for the initiative. Photo: U.S. EPA

are one element of the Great Lakes Water Quality Agreement made by the U.S. and Canada in 1972 to create an international effort to protect the Great Lakes.

“Lake Huron has undergone some drastic changes in the last ten years or so,” Warren said. “The work we are doing will lead to better management of the lake.”

Other agencies studying the lake include the U.S. Geological Survey, wildlife and environmental agencies from Michigan and Ontario and universities from both countries.

“There are 11 Canadian and U.S. organizations and 24 science monitoring projects going on this summer,” said John Marsdon, a manager of Great Lakes issues and reporting for Environment Canada.

“Environment Canada covers all the lakes every year, so does the EPA, but the cooperative field season 2012 for Lake Huron harnesses everyone in a coordinated fashion,” he said.

“When we cooperate it’s amazing how much we can get done,” said Paul Horvatin, chief of environmental monitoring and reporting branch for the U.S. Environmental Protection Agency. “It all adds up to more than what we can do separately.

“It will lead to a much better managed lake.”

In 2010 the Cooperative Science and Monitoring Initiative studied Lake Michigan; in 2011 it focused on Lake Superior. Meetings are already underway to coordinate ships and areas of study for Lake Ontario in 2013. Lake Erie will come next.