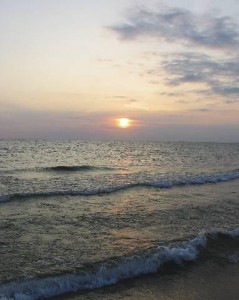 Lake Michigan at sunset. What do it inspire you to do? Photo: Lars Lenz.

The Great Lakes inspire people to do great things.

Or at least very quirky things.

Whether it’s raising awareness for a cause or just being near the water, people use the lakes as backdrops for adventure.

And in April, we covered two Minnesota bicyclists circling the perimeter of the Great Lakes. They’ve now reached Michigan and are traveling up Lake Huron’s western coast.

They aren’t the only ones whom beach-goers should look out for this summer:

Not everyone’s Great Lakes challenge is as intimidating.

On May 24, two Michigan women achieved their goal to swim in all five Great Lakes in 24 hours. It took only 15 hours of driving time.

“People have such an attachment to the Great Lakes,” she said. “They want the lakes to get press so communities stay excited about them.

“It makes me think more people need to get out here and do things like this to raise awareness about our Great Lakes.”

Are they? Who else is doing a Great Lakes challenge this summer?

2 thoughts on “These people run, bike, kayak, row, swim around or across the Great Lakes”