Foreign plants and animals that threaten the Great Lakes ecology could soon be blown apart by ultrasound. 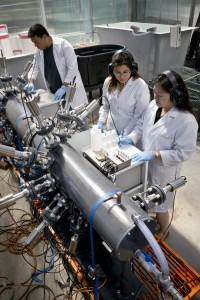 A new device is designed to kill such invasive species lurking in the ballast tanks of ships.

Known as the BallastSolution, it kills invaders by blasting with sound the water entering and leaving a ship’s ballast.

Ballast water is pumped on and off ships to stabilize them for varying loads of cargo. It has brought invasive species into the Great Lakes for decades. The zebra and quagga mussels, and the round goby were introduced in this way, wreaking havoc on native species. The annual cost of controlling these species is in the millions.

On June 21 the U.S. Coast Guard will begin enforcing a requirement that ocean-going ships have an onboard method of treating ballast. It will affect all ships by 2017.

Right now ships that never leave the Great Lakes are exempt, but it may eventually apply to such “lakers” as well.

In testing, the sound device killed 99.9% of targeted species, said Meiyin Wu, an ecologist and an associate professor of biology at Montclair State University in New Jersey.

Wu and Junru Wu, a professor of physics at the University of Vermont, developed and built the device.

It uses electricity to generate ultrasound waves, she said.  A computer calculates how much energy to create to blast apart bacteria, plankton and small mollusks living in the ballast.

The project is partially funded by a grant from the Great Lakes Restoration Initiative, through the United States Department of Interior.

“The sound waves are energy, and energy vibrates gas bubbles in organisms,” she said. “These vibrating gas bubbles go through membranes; they break up into pieces.”

The gas particles expand which makes organisms burst, she said.  Simple exposure to the increased heat from the ultrasound waves also kills them.

It isn’t effective for larger mollusks or fish. The system targets smaller life forms that escape a ship’s filtration device needed for the larger organisms. 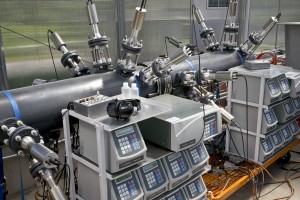 An up-close look at the BallastSolution. Photo: Mike Peters

The goal is to have ship owners install the technology into engine rooms, retrofitting plumbing and piping to make it fit.

The Coast Guard currently requires ships to exchange ballast water in mid-ocean in hopes of killing invasive species.  The new regulations require ships to treat water before it is exchanged.

The BallastSolution is an improvement for several reasons, Wu said.  A ship isn’t able to completely remove all the water from its tank, so some fresh or brackish water is always left behind. Also, a diluted salt water solution remains in the ballast. This decreases the ability of the water to shock its intended targets.

Chemicals such as chorine, ozone and hydrogen peroxide can also treat ballast water.

Concerns about chemical use include unintended environmental impacts and the safety of storing and handling of potentially dangerous chemicals.

There are no long-term toxicity issues with the use of the BallastSolution, said Wu.

The Coast Guard is working to develop protocols to recognize and insure the treatment system a ship is using is working, Thomas said. Inspectors will question the crew on treatment operations and look at ship logs to insure treatments are taking place.

It’s not the Coast Guard’s position to make these regulations, Thomas said. If a ship doesn’t have treatment equipment, the ship won’t be allowed to exchange its ballast water.

This would effectively prevent the possibly contaminated ship from entering into the Great Lakes. 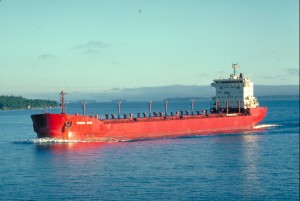 A laker on the water. Photo: epa.gov

“It’s a moot point,” he said. “There isn’t a treatment being made yet that would work with our ships. Flow rates, volumes, and the temperature of water make it difficult.

“Since our vessels never leave the Great Lakes we shouldn’t have to treat our ballast water,”  Nekvasil said. “If we stop ocean-going vessels from carrying them in, there wouldn’t be an issue.”

There are questions on the efficacy of treating ballast water on lakers, said Thomas. The Coast Guard intends to address this at some point. Room has been left in the regulations to eventually require lakers to treat their ballast water. Even though they don’t import invasive species, they can still move them from port to port within the lakes.

Meanwhile BallastSolution is looking for other companies to commercialize the technology, Wu said.

“There are several factors that will influence the cost of the system and this is an area I do not  have enough detail on yet to feel comfortable giving you an estimate,” Per Stromhaug, a Technology Transfer Coordinator for BallastSolution, wrote in an e-mail.

The cost depends on the size of a ship and the amount of retrofitting that needs to be done, said Wu.