Some scientists worry that less ice on the Great Lakes will create low water levels that affect the region’s ecology and economy.

A lot of the evaporation occurs during winter, said Henry Vanderploeg, research ecologist at the National Oceanic Atmospheric Administration. If there is no ice cover, the lake water evaporates faster resulting in lower water levels. 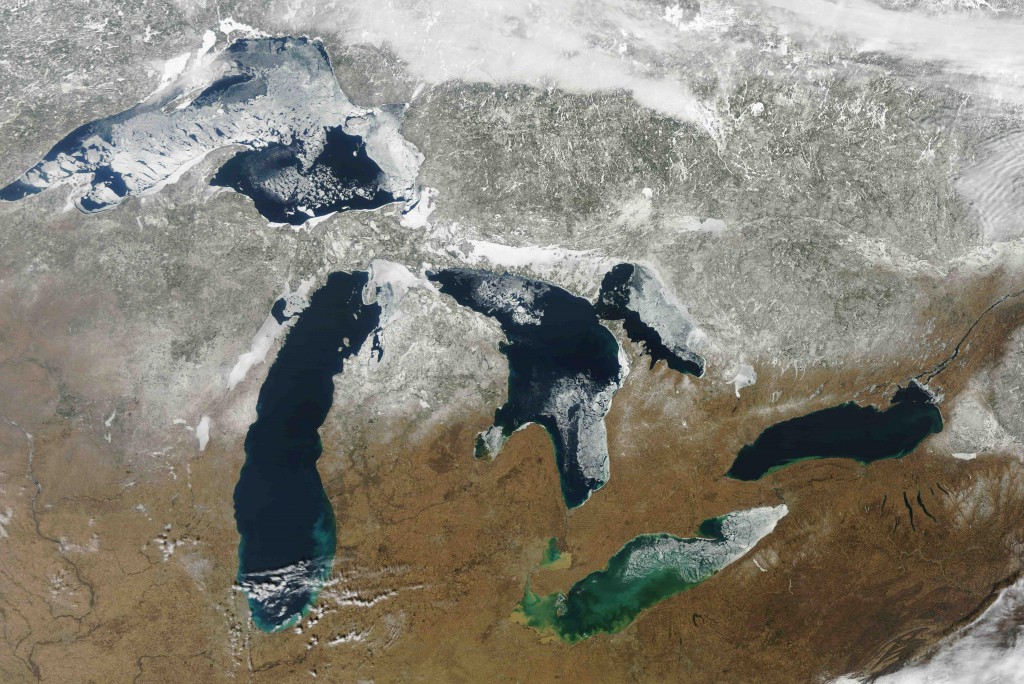 Satellite image of the Great lakes showing little to no ice coverage in March 2012. Photo courtesy of the National Oceanic Atmospheric Association.

This could pose a huge problem for species like whitefish that rely on the ice’s protection from waves to lay their eggs in shallow water.

Interest in the problem increased recently with the release of a study indicating that Great Lakes ice coverage has decreased by 71 percent in the past 40 years, said Research Ice Climatologist Jia Wang, the study’s author.

Although scientists are aware that the massive ice loss will affect the ecology of the Great Lakes, they are not completely sure how.

And lower water levels can harm the Great Lakes economy. More than 200 million tons of cargo is shipped every year through the Great Lakes, Wang’s study reported. Since 1998 when water levels took a severe drop, commercial ships were forced to carry lighter loads.

Studying how the warmer winter climate affects water ecology is not as easy to do.

“We don’t have many scientists going out on the ice in the winter because it’s a dangerous time to study,” said Vanderploeg. The risk of falling through the ice mixed with poor weather conditions makes it a hard time to study water ecology.

Though it is clear that such species as whitefish could be harmed by the lack of ice, there is not enough research to confirm what’s at risk.

This past mild winter is a reason for concern. 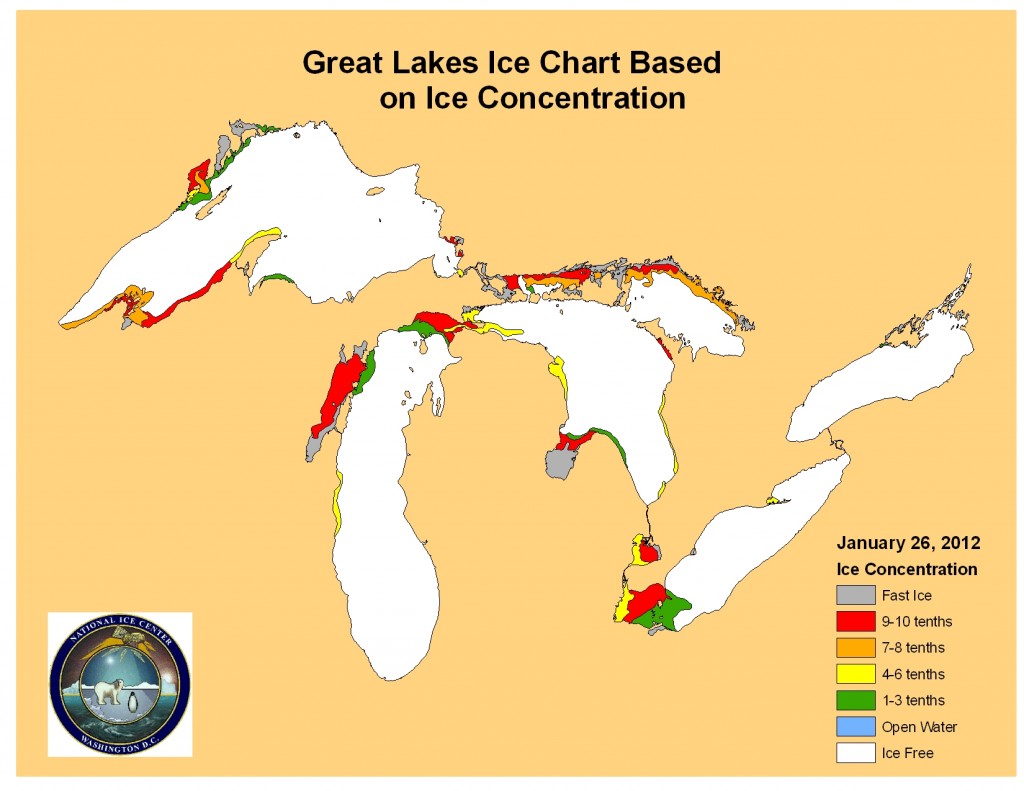 This chart measures the amount of ice concentration, by tenths of an inch, on the Great Lakes on January 26, 2012. Photo courtesy of the National Ice Center.

“We’ve never seen water this warm this soon, ever,” said Vanderploeg. “We’re into a new temperature area that we’ve never seen before. We don’t know whether the fish will benefit from it or not.”

Less ice allows the water to warm earlier, speeding growth of invasive species like zebra mussels and quagga mussels. Mussels are sensitive to temperature changes. Just a few degrees change in temperature can cause them to eat phytoplankton twice as fast, Vanderploeg said.

And phytoplankton are the foundation of the food web, producing energy for many Great Lakes species.

The earlier mussels feed on phytoplankton, the quicker the rest of the food web will be robbed of their fair share, he said.

Water quality could also be affected. Ice keeps the lake settled and calm. If there is no ice then the waves cause the water to stir up contaminants that have settled at the bottom, Wang said. Mixed in with the water, these contaminants could be swallowed by fish, thus entering into the food chain.

The study shows that Lake Ontario lost the most ice since 1973 with a decrease of 88 percent ice coverage. Although the natural variability of the internal climate system also causes the warming of the Great Lakes, Wang believes the study proves that the ice loss is directly related to humans.

Global warming from the burning of fossil fuels and a variety of other human sources definitely exists, said Wang. “From this study we can confirm that this is the case.”

Still, Wang says that this year’s unseasonably warm winter is more likely due to a mixture of strong Northern Atlantic Oscillation and La NiÃ±a, because both weather patterns apply the warming to our region.

Year to year ice cover on the Great Lakes on Dipity.