A big stretch of white, sandy beaches is a picturesque scene for vacationers looking to swim, read or build sandcastles. But a clear Great Lakes shoreline can also attract pests — birds. 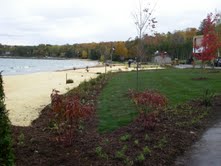 “Birds want to be able to see any predators that might be around, so they tend to stay in more open areas and they land in more open areas,” said Amanda Surfus, a conservationist for the Door County Soil and Water Conservation Department in Wisconsin.

Last year the department began planting tall dune grasses and shrubs on county beaches to keep birds from moving freely between the shore and the park areas behind it.

All the bird traffic was making quite a mess, Surfus said.

“They don’t feel safe in taller vegetation because they can’t see their surroundings,” Surfus said.

Although birds are part of shoreline ecosystems, Greg Kleinheinz, associate dean and professor of microbiology at the University of Wisconsin-OshKosh, said huge flocks of birds aren’t natural on beaches. 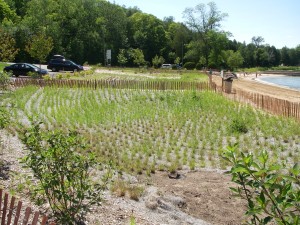 Kleinheinz worked on a study for the International Joint Commission looking at the impacts birds have on water quality.

“There’s nothing wrong with birds, but we want them to be naturally present and not present in numbers that are above what you would normally expect to see,” Kleinheinz said. “It’s a balance of nature. Once you upset the balance, you get too many of them and that’s when you start having problems.”

Those problems come from the pathogens, or germs, in bird feces that can sicken beach visitors and wildlife.

“Whether the bird waste is on the sand or the water, the more birds you have the more waste you’re going to have on the beach,” Surfus said. “It could negatively affect the water quality of the beach area.”

Municipalities monitor for beach contamination, and if they find too much they post advisories telling swimmers to avoid the beach.

Surfus said the department re-landscaped beaches that are most often contaminated by birds and stormwater. Although the grasses have been good for cutting contamination, Surfus was surprised to get beachgoers’ approval.

“We weren’t sure how the community would react to grass being planted, but the city has been getting positive feedback,” Surfus said. “It’s a sense of not being at a city beach, but a more rural beach where there are a lot of dunegrasses and dunes.”

The landscaping also filters water that runs off the mainland, which makes it cleaner before getting to the lake.