Editor’s note: Beach monitoring is one of the issues that will be discussed Oct. 11-14 in Detroit at the 2011 Great Lakes Week.  Detroit Public Television is providing ongoing coverage of Great Lakes Week at greatlakesnow.org

Advisories cautioning visitors to stay out of the water are common on Great Lakes beaches, especially after rainstorms wash bacteria from nearby cities and farms into the water. 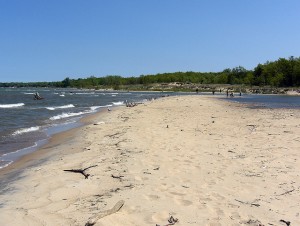 “Some beaches sample once a week,” said Laura Kramer Kuns, supervisor of liquid and solid waste water supply programs in Lake County, Ohio. “We happen to be one of the handful that sample every day.”

The International Joint Commission recently highlighted the need for consistent beach monitoring throughout the Great Lakes region. That would make it easier to see how the region’s beaches change over time, said Raj Bejankiwar, a scientist who worked on the report for the U.S./Canadian agency.

To test a beach for contamination, scientists look for E. coli bacteria. The E. coli they monitor isn’t a health risk, but the amount present indicates the chance that other harmful germs are present.

Not every county on the Great Lakes tests as thoroughly as Lake County, which received a grant to study beach contamination. Kuns said some counties test four times per week and some test only once per week.

No matter how often they sample, there are similar difficulties for all beach communities. The hardest part of beach monitoring is the time it takes to run tests. Testing takes an entire day, which Bejankiwar said is plenty of time for beach conditions to change.

“Right now when you sample the beach you don’t get the results until the following day, so you’re basing your advisory on yesterday’s beach quality,” Kuns said. “There needs to be a push for getting same-day analysis and developing a predictive model.”

To get a timelier look at the day’s conditions, Lake County scientists are looking into creating a predictive model for beach contamination. They’re studying the correlations between E. coli levels and wind direction, wave height, water temperature, rain data and other factors.

Getting every county to sample with the same frequency still wouldn’t satisfy Bejankiwar. Testing shows the approximate level of pathogens in the water, but it doesn’t indicate where they come from. Contaminants could come from humans, livestock or wildlife, and not knowing the source can make clean-up challenging. 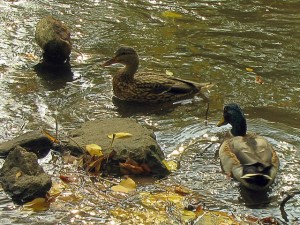 The IJC report recommends that determining the impact of contaminants from waterfowl feces should be a priority. Although it’s generally accepted that waterfowl contribute significantly to beach contamination, Bejankiwar said there’s a lack of credible studies that show the relationship.

The source of contamination isn’t the only unknown. Often, scientists don’t know the level of human risk of contamination because people who get sick after visiting beaches don’t visit doctors. And if they do, their doctors don’t report to community health departments.

“Most people attribute their illness to ‘it had to be something I ate,’” Kuns said. “People don’t even think about the fact that they were swimming.”

“There are some places that are proposing there should be data sharing among all the stakeholders in the medical community, beach managers and the science community,” Bejankiwar said.

But like any other program, beach monitoring depends on time, manpower and funding.

“It takes time and money to send people out to the beach,” Kuns said.

Here’s what Bejankiwar and other scientists recommend in the IJC report that health officials should:

The report will be presented at the International Joint Commission’s biennial meeting in October as part of Great Lakes Week in Detroit.

“We don’t want to say much there, but we want to listen to the public,” Bejankiwar said.