More than a dozen devices broadcasting crucial water data from rivers across Michigan could soon be switched off as a result of projected state and federal budget cuts.

The U.S. Geological Survey’s network of 178 stream and lake gauges in Michigan most commonly measure the height and volume of water flowing through rivers. Some measure other aspects of water quality like temperature, water clarity and dissolved oxygen.

Live updates and old records from the gauges are freely available online. State and federal agencies rely on the data for flood forecasting and pollution permits. Paddlers and anglers use the gauges to ensure river conditions aren’t too wild before heading out for a day on the water. 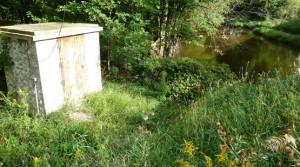 This river monitoring station on the Red Cedar River near Williamston is one of dozens in Michigan that could be switched off or downgraded.

As many as 31 gauges could be closed or downgraded to cheaper but less useful measurement tools at the start of the next fiscal year on Oct. 1, according to state and federal officials.

Operating a basic stream gauge costs around $15,700 per year, said Tom Weaver, chief of the USGS section that manages the gauges in Michigan. Those with advanced measurement tools can cost nearly twice as much. The Geological Survey splits the bill at many gauges with dozens of partners, including state agencies and local governments.

“These are mostly high-profile sites,” Weaver said of the MDOT gauges. “There’s a lot of scrambling going on right now.”

Those gauges include sites on the Grand, Kalamazoo, Flint and Jordan rivers. The gauge on the Grand River at Lansing was installed in 1901 and has logged data continuously since 1934.

“It’s something we’re very concerned about,” Walton said. “Any time we lose any type of gauging station where we do forecasting, it makes our job real difficult to provide adequate lead time from a warning standpoint for flood issues.”

“We’ll be able to continue to say whether it’s going to flood or not flood,” he said. “But we won’t necessarily be able to tell them how deep the water’s going to get and how high flood waters are going to go.”

Several gauges that could lose funding are in the Lansing area on the Grand and Red Cedar rivers, an area historically prone to flooding.

“There are portions of that area that get flooding almost every year,” he said. “It may not be real major flooding, but they do get some high water.”

The DEQ uses gauge data to determine a river’s 100-year floodplain, said Dave Hamilton, chief of the agency’s Water Management Section. That’s the area around a river that would likely be covered by the highest level of flooding expected from a river every 100 years. Floodplain maps are important for flood insurance and building permits.

Additionally, any structures built in a river must be able to withstand a 100-year flood without backing up water and causing additional flooding upstream, Hamilton said.

The DEQ also uses the data to determine how much pollution facilities like wastewater treatment plants can safely dump into nearby streams.

“They have to treat water to the point that, even during an extreme drought, they’re not going to cause a water quality problem,” Hamilton said. “We use gauges to calculate what is an extreme drought condition at these locations.”

The DEQ helps fund around 60 USGS stream gauges, Weaver said. The DEQ isn’t cutting gauge funding, but their contribution has stayed flat while gauge costs have increased. The USGS has been able to find enough money to make up the difference, but Weaver said projected federal budget cuts mean scaling back the number of gauges his agency funds with DEQ.

These won’t be the first gauges lost to budget cuts, but the outlook is increasingly gloomy for the scientists who maintain and rely on the data.

“It’s happened before and it’s always a struggle in tough economic times,” Walton said. “We always seem to manage to be able to juggle things to keep the ship afloat, but it’s getting harder and harder in today’s economy.”

Even though gauges have a tendency to come and go, Hamilton said the loss of a gauge is still a pain.