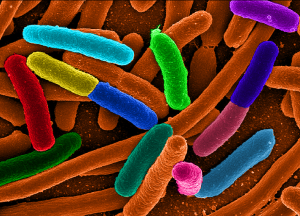 Escherichia coli, shortened to E. coli, is the bacterium frequently blamed for sick swimmers and other beach contamination problems.

Scientists with the U.S. Geological Survey are researching E. coli and other water-borne pathogens from Lakes Michigan, Huron and Erie to determine if that blame is warranted. They don’t expect to see results until early next year.

“It will be interesting, I can assure you,” said Sheridan Haack, the lead researcher on the project.

Debates have continued in the scientific community regarding whether E. coli is an accurate indicator of the health of water.

As far back as the 1800’s, E. coli was used as a warning sign for the presence of germs that caused typhoid and cholera, said Joan Rose, co-director of the Center for Water Sciences at Michigan State University.

“In recreation waters, its history comes from the 1950s, with the public health services in the U.S.,” she said. “They did special studies where they measured people swimming and E. coli in the water. What they found was the higher the E. coli [count], the more likely people got sick.”

The bacterium was used frequently as a “yardstick” to measure possible contamination in the water, Rose said.

But E. coli is not a perfect indicator of a health threat.

“One of the reasons is that it doesn’t relate very well to our new emerging pathogens,” she said. 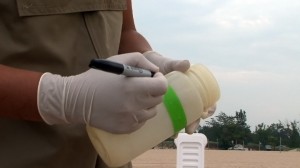 Water testers label sample bottles with the location of the site, the time and date and other lab specifications. Photo: Amol Pavangadkar, Adam Rademacher and Stephanie Sparks.

Those emerging pathogens include the norovirus and a variety of protozoan – tiny animals that can cause illness.

“These are in different classes of pathogens and when E. coli has been absent, these pathogens have still been there,” Rose said.

E. coli exists naturally within the human body and can be detected in soil samples in agriculture. Public policy and laws also include specific language regarding E. coli, even though the bacterium might no longer be considered an accurate indicator of contamination.

“E. coli has lost its ability as a ruler, where we can gauge where we are on the level of risk,” Rose said. “We want to know if we’re on the high or low end of the risk. E. coli fails on both sides of that yardstick that we use for measuring water quality and health.”

Another problem with using E. coli as an indicator is the long period of turnover between taking a sample and finding the results. Testers often don’t find out contamination results until at least 24 hours after the sample was taken.

There are also a number of potential sources for E. coli, including rainwater runoff and animal waste. The source might not even be pollution at all, since E. coli does exist naturally in the environment.

Developing research has found ways to accelerate the testing process. Quantitative polymerase chain reaction, or qPCR, is a molecular method that amplifies target sections of a DNA strand to examine and identify, said Asli Aslan, a doctoral fellow with the Department of Fisheries and Wildlife at Michigan State University.

“For example, if a water sample is suspected for Salmonella contamination, we can now detect this organism within less than six hours once it is in the lab,” she said. “This is a rapid method but also an evolving method. Companies are producing next-generation instruments that will be able to give the results within 20 minutes.”

The problem with qCPR is that it’s easily influenced by other factors within a water sample, Aslan said.

“[It’s] sensitive to inhibition by many compounds and chemicals found in the environment,” she said. “But researchers are getting to a point where the inhibition can be eliminated. It is a progressing area.”

The implementation of this method also will be a challenge because it requires specific equipment and expertise, Aslan said. Health departments accustomed to testing for E. coli might find it challenging to change their testing methods. 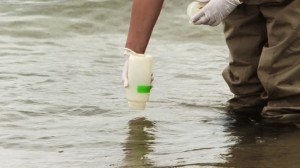 “Given the failures of the current methodologies and the likelihood that new criteria will require qPCR, there is a real need for beach managers to learn about and ultimately be able to implement these methods,” she said.

The samples used in the geological survey’s study were collected last year and are currently being analyzed, Haack said.

She expects to give an update on her findings at the Great Lakes Beach Association Meeting in September. The completed journal article on the research – taking into account the process of having her research peer-reviewed – will likely be published in early 2012.

According to an abstract on the research, 30 samples were taken and examined from 12 beaches on the shores of Lakes Michigan, Huron and Erie.

“It’s a complex and massive data set,” Haack said. “We’re looking at over 400 bacterial samples that were analyzing for each sample and when we try to take all those samples and relate them to rainfall, turbidity and wave height, it’s really a large data set. It’ll take us a little while to wade through it.”

The research is too premature to report any conclusions, Haack said.

She said although she’s demonstrated the presence of pathogens at most of the beaches, it varies so greatly from sample to sample that the analysis and interpretation will be “daunting.”

“We’re really interested to see how the results turn out,” she said. “I’m sure they’ll be valuable to the Great Lakes community for interpreting, monitoring and to better understand risk.”