Editors note: This story first appeared in Michigan River News and is reprinted with permission. 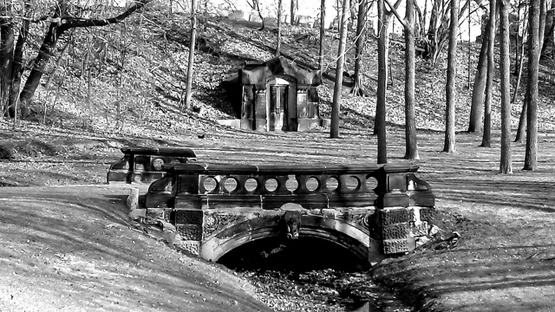 Except for a small exposed section at Elmwood Historic Cemetery, Bloody Run Creek is buried as part of the city's sewer system. Photo: Dave Garvin via Flickr

A group of developers and engineers are in the planning stages of “daylighting” Bloody Run Creek on Detroit’s east side. Daylighting means pulling back the pavement and liberating streams that were buried for urban expansion.  Bloody Run was buried more than a century ago as part of the city’s sewer system.

The stream would become a hub for 3,000 acres of sustainable development projects, according to Richard Baron, a St. Louis-based developer who’s partnering with the University of Detroit Mercy’s Collaborative Design Center on the project.

“We’re looking at all kinds of projects by opening the river,” said Baron, a Detroit native.  ”Parks areas, solar fields, urban agriculture, wind power.  The idea is to reclaim a post-industrial city.”

But it’s not strictly a development project.  Exposing the stream would ease the strain on Detroit’s sewer system, according to Stephen Vogel, the lead planner on the project.  Vogel is a professor of architecture and a senior principal at Mercy’s design center, which received $450,000 from The Kresge Foundation to kick-start the planning process.

“The creek will take three billion gallons a year out of sewage treatment plants,” Vogel said. “Basically we’ll be returning to a natural drainage system.”

The stream would also naturally filter runoff from parking lots by running the polluted water through sediment and vegetation, according to Vogel. Rainwater ponds along the creek would help keep it flowing during dry spells.

The design center teamed with private engineering and consulting firms six months ago to map out details, which are nearly complete.  While planning is complex, the actual project would be “a lot of digging down in the ground,” Vogel said.

While still a relatively new idea, daylighting is gaining popularity.  Other buried streams have recently been uncovered in Singapore, New York, and San Antonio. In 1995, Vogel worked on another project in Kalamazoo that liberated chunks of Arcadia Creek.

The stream now meanders through downtown Kalamazoo and has spawned development and expanded capacity for storm water retention, according to Marc Hatton, redevelopment project manager with the City of Kalamazoo.

“It has opened up and beautified the area.  It’s definitely had a positive effect aesthetically,” Hatton said.  ”It’s also alleviated downtown flooding issues quite a bit.”

Hatton credits the creek for businesses, colleges and museums moving downtown, and for the conversion of older buildings into condos.

Since the Arcadia Creek project, Kalamazoo has had property tax revenues increase from $60,000 to $400,000 annually, according to a report from the Rocky Mountain Institute, an environmental think tank. Festivals along the stream generate $12 million in local business sales.

Bloody Run is one of several creeks that once ran free in the area prior to industrial expansion.  The British gave the creek its ominous name after a particularly gruesome battle with Chief Pontiac in the mid-18th century.  A portion of the creek remains exposed at Elmwood Cemetery on Detroit’s east side before it dumps into the Detroit River.

As Detroit’s population continues to shrink, the idea of restoring natural areas has gained momentum.  The city’s water and sewerage department has been working with the team.  Baron has tried similar projects in the past, but the city’s politics “were always so dysfunctional,” he said.  At least on the Bloody Run project, that’s finally starting to change, according to Baron.

“They’ve expressed interest but they just have a million other things on their agenda,” Baron said.  ”We just want to make sure what we do is complementary to other projects the city is interested in.”

A restored Bloody Run would flow through a mix of private and vacant land. Planners hope the city will donate its unused land. Existing development won’t allow the stream to follow its historic path, but the plan is to follow it as closely as possible, with little disruption to neighbors.

Regional environmental groups like the project for its potential to improve water quality.

“Any time you can open up a storm drain and create stream banks and vegetation to absorb storm water, especially here, that’s a positive thing,” said Bob Burns, riverkeeper with the Friends of the Detroit River, an organization that works to preserve and improve the river.

Most problems in the river come from sewer overflows, according to Burns.

“This will lessen stress on the main river and the sewers,” he said.

The project won’t be cheap or fast.  It’s estimated to take 10-12 years and cost $1 billion. The team will look to the Environmental Protection Agency and other federal sources for funding once the Kresge money dries up.

While money is critical, community approval is the first priority, Vogel said.

“There’s a lot of vacant land, but there are still strong neighborhoods,” he said. “With the history of projects in this city … we need support from residents before we do anything.”

The engineering, while not an “everyday feat,” is basic once you have the money, Vogel said.  And he remains confident about the daylighting of Bloody Run, even if he’s gotten burned before.