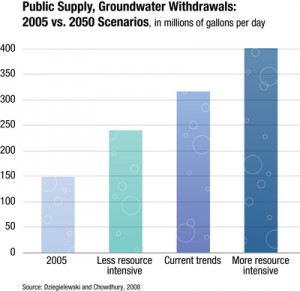 Use of groundwater in northeastern Illinois communities if use patterns are less intensive, stay the same or become more intensive. Graphic: Illinois State Water Survey

Before the wells dry up and the sewers overflow, a northwest Chicago suburb has teamed up with an all-star squad of planners to guide future water policy and use.

The small village of Lake Zurich gets drinking water from an aquifer that is pumped faster than it can recharge, according to studies.  The water also has low levels of radium, which means treatment and extra costs for the village.

And the village’s sewer system is strained to capacity, stirring fears of a double digit sewage rate increase to fix the problem, said Rich Sustich, village trustee, who is spearheading the water planning effort.

“When you have this nexus of issues like we have – drinking water, storm water and wastewater, it forces out-of-the-box thinking,” Sustich said.

In January, Illinois approved Lake Zurich and nine other communities in the northeastern part of the state to tap  Lake Michigan for water because of growing concern that the groundwater they use now will dry up.  Studies indicate that population and economic growth will cause water use to increase even if conservation measures are taken.

Lake Zurich is not ruling out sticking a straw into Lake Michigan, but has decided to take a more calculated approach.

“Most people don’t realize that there are substantial costs to get drinking water from Lake Michigan,” Sustich said. “You don’t just tap right in.”

An initial scenario, which would’ve connected the ten communities by pipeline to an existing intake facility in nearby Zion, was estimated at $250 million.

Part of the planning team’s mission will be recommending the switch to Lake Michigan water or sticking with groundwater, and analyzing pros and cons of both.  Ultimately, the village is looking at cost, ways to conserve and which system will be the most sustainable.

Sustich has been “in the water business” for 35 years, mostly at the Metropolitan Water Reclamation District, the agency responsible for Cook County’s wastewater.  The water planning team idea was born out of a luncheon at which Sustich spoke about the water challenges of small communities.

In March, the village board hired a team to assist with water resource planning, with conservation and sustainability as top priorities.

The team consists of The Metropolitan Planning Council, the Illinois-Indiana Sea Grant, the Chicago Metropolitan Agency for Planning and the Center for Neighborhood Technology.

The Metropolitan Planning Council leads a community-building initiative to tackle the water issues, said Josh Ellis, a project manager with the council.

“We’ve used this process successfully in housing, transportation and downtown development,” Ellis said.  “This is our first time for water resources but the same methods apply.”

All of the processes and outcomes of the team’s work with the village will be shared with nearby communities.  Far from an isolated problem, officials in nearby Waukesha, Wisconsin are also battling radium-tainted groundwater and looking for approval to tap into Lake Michigan.  It is the planning team’s hope that Lake Zurich’s approach could help others facing similar water issues.

“He’s (Sustich) got large, grand visions of Lake Zurich being a model for water and water policy,” Ellis said.  “And it could happen.”

“We give them what we know and they basically tell us what we don’t know,” Ellis said.

The volunteers’ work will be the backbone of a list of recommendations given to the village in the fall to guide short and long term action.  The list will be reviewed by village trustees and Lake Zurich residents.

The team’s work will not necessarily stop after recommendations, according to Margaret Schneemann, a water resource economist with the Illinois-Indiana Sea Grant and Chicago Metropolitan Agency for Planning.  The current agreement is through December but the organizations have agreed to stick around through implementation if they’re needed.

Outside of consultation and technical assistance, the team will help Lake Zurich officials reach out to the community and work with nearby towns.  Community involvement is important, Schneemann said.

“Their (The Metropolitan Planning Council’s) process is a way to hold up the goals of the community against our recommendations and find a way to integrate the two,” Schneemann said.

According to Sustich, local industry has been more interested in the process than citizens; something he hopes will change as outreach increases.

Lake Zurich paid $8,000 to The Metropolitan Planning Council to cover travel and administration but the team is working for free otherwise.  It is a good way to test the community building initiative process against water resource issues, Ellis said.

“It allows us to try our process in a new forum – water,” Ellis said.  “We’re not making any money on this.”

The partnership came on the heels of a three-year water study ordered by former governor, Rod Blagojevich. The outcome of that order, dubbed “Water 2050,”  singled out the northeastern part of the state as a priority area due to high population, economic growth and the strained aquifer.