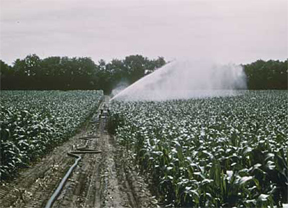 Two years after implementing an online tool to reduce the impacts of excessive water withdrawal from the Great Lakes, funding that supports the Michigan project has dropped by more than 90 percent.

The water withdrawal assessment tool alerts users if the amount of water they intend to withdraw or divert is harmful to fish biodiversity. It issues on-the-spot permits for safe withdrawal requests, based on a database from stream and river flows.

The $900,000 annual funding that was initially allocated to the project from the state’s general fund has dwindled to $80,000, said Dave Hamilton, chief of the Department of Environmental Quality water management section.

The project also gets about $200,000 from water withdrawal reporting fees, but that is less than 20 percent of the project’s total running cost.

Because of the shortage of funding, the staff that runs the project has been reduced by half, Hamilton said.  Essential operations such as stream and lake water data gathering, the maintenance of the tool’s database, database reviews and the need for continuous site-specific research efforts have been cut back, he said.

Part of his unit’s mandate is also to guarantee that large water consumers are obeying the law, and to work closely with user groups to address urgent water concerns, tasks that will soon be impossible to run, he said.

Consumers withdrawing more than a monthly average of 100,000 gallons per day include the agriculture sector and non-agriculture sectors like quarries, mines, public water suppliers, manufacturers, processing plants and turf grass management organizations, among others, and are subject to certain statutory regulations.

About 80 percent of a total 216 permit requests were granted through use of the tool last year. The remaining was subject to further environmental impact review; only three were denied.

Though agency officials hope that the legislature will restore funding, there are no such proposals pending, Hamilton said.

Other states like Ohio, Wisconsin, Minnesota and Massachusetts are underway with plans to implement similar water assessment tools.

The use of the automated tool applies to all water sources including groundwater, the Great Lakes, inland and surface waters.

Kristy Meyer, the director of Clean Water Programs at the Ohio Environmental Council, an environmental advocacy group, said her  organization is working on legislation requiring all groups to pay to use a similar tool now under development in that state.

“We can’t mandate a program and not have a source of reliable funding for it,” she said.

That’s what happened in Michigan. Farmers were exempt from paying fees to use it. If they were required to pay like others, the kitty has a chance of tripling from the current $200,000 user fees, Hamilton said.

The Michigan Farm Bureau supports the assessment tool by offering user guides to farmers. But it does not support the user fees for farmers.

Farmers already practice costly water conservation practices as required by the state and should not be required to pay more fees towards conservation, said Matt Smego, the organization’s legislative counsel.

“Farmers are not responsible for a registration and reporting fee of $200 if they register and report their water use with the Michigan Department of Agriculture,” Smego said.

Ellen Vaughn, the group’s program director, said the collapse of the water withdrawal program would certainly be a loss to the management of water resources, particularly the Great Lakes.

“We were hoping that different governments would support this tool to reduce the growing potential for Great Lakes water withdrawal and diversions,” she said.  “There’s an increasing concern about its negative impacts to water biodiversity.”