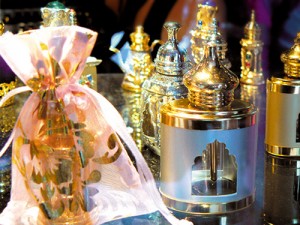 Approximately 5 percent of people are so greatly affected by fragrances that it diminishes their quality of life. Photo by William Cho via Flickr

Nancy Michelli keeps a surgical mask in her car.

But she isn’t afraid of other people’s germs making her sick; it’s how they smell.

“I get this overwhelming feeling that I am going to pass out and die. I get burning eyes and headaches and have difficulty breathing,” she said. “I have to be away from them completely.”

It isn’t body odor she is talking about. Instead, the California woman is protecting herself from the fragrances people carry in their clothing, skin and hair from hair products, laundry detergent and perfumes.

Michelli is far from the only one affected by fragrances.  About 5 percent of individuals have such sensitivity to chemicals that it greatly diminishes their quality of life, according to Claudia Miller, an environmental health and allergy expert at the University of Texas.

Professor Anne Steinemann at the University of Washington recently analyzed 25 of the most popular fragranced products, including air fresheners, fabric softeners, soaps, lotions, shampoo. She found that they emitted 133 different Volatile Organic Compounds. VOCs are gases that can affect both the environment and health.

According to the Environmental Protection Agency, VOCs are ten times more concentrated indoors than outdoors. In addition to personal care and cleaning products, they are released from paint, lacquers and glue. Steinemann found that one fourth of them were considered toxic or hazardous by federal law.

“When I started doing this research, I got hundreds of people wanting to tell me their story; it really resonated with people,” she said. “I knew it was a problem, I had no idea of how big of a problem it was.”

Steinemann has heard from fragrance sufferers worldwide.  People have described seizures and asthma attacks from being around the products, she said. One woman was unable to be with her dying mother because her sister used scented hair products.

Their stories are similar to Michelli’s who said she was forced to retire early from her job as a 911-operator in California because her coworkers used too many fragrances. She noticed severe headaches and trouble breathing after staying in a dorm for overnight shifts.

“I didn’t have very much understanding from my coworkers, I think they thought I was exaggerating or making it up so they didn’t have much empathy and they didn’t understand,” said Michelli. “They think because it is not happening to them, it is just you; they don’t realize how toxic the materials are.”

Steinemann calls the health effects of someone being exposed to scents not belonging to them or the products they own, “second hand scent.”

“It is almost like cigarette smoke,” she said.  “While people stopped going into places with cigarette smoke, people are now going to stop shopping in particular stores.”

In October, Teens Turning Green, a student education and advocacy group, protested outside Abercrombie & Fitch’s New York store on 5th Avenue. In September they protested outside a San Francisco store. The group objected to the store’s excessive overuse of their fragrance, Fierce. The group stated that the fragrance is reportedly sprayed on all the merchandise and even pumped through the vents of the store.

The corporation responded on its Facebook page that its cosmetics are formulated, tested, labeled and monitored to assure regulatory compliance and safety.

The Environmental Working Group reported last May found that 17 popular fragrances, including Fierce, contained a variety of synthetic chemicals. The non-profit public health and environmental organization said that the fragrances included petrochemicals derived from petroleum and chemicals that can alter human hormones.

“It’s no surprise why people often feel ill around fragrances,” said Stacy Malkans, co-founder of the Campaign for Safe Cosmetics, another organization authoring the report. “They spray the stores down both inside the stores and outside the stores, without any notification or consent from people.

The American Eagle fragrance “Seventy Seven” contained 24 chemicals unlisted on the label, the highest number of any of the fragrances tested. Chanel’s Coco had 17 and Abercrombie and Fitch’s Fierce for men had 11.

Concealing the chemicals that make up a fragrance is common.

The Federal Fair Packaging and Labeling Act of 1973 requires companies to list cosmetic ingredients but exempts fragrances. Many of them are protected as “trade secrets.”

“If companies were proud of their formulations and knew them to be safe, they wouldn’t hide their identities,” said Leann Brown, press associate with the Environmental Working Group. “We are not surprised that so much was missing from the label.”

Approximately 66 percent of the products not listed on the fragrances tested by the Environmental Working Group and the Campaign for Safe Cosmetics were never assessed for safety, according to the organizations.

An average of 10 “sensitizing” chemicals or allergens were found in the 17 fragrances tested in the report. These chemicals can cause severe allergic reactions including asthma, wheezing and headaches, and are found in more than just perfumes or colognes.

One of Steinemann’s studies showed that 30 percent of people showed some kind of physical reaction to scented products.

“Sensitizing chemicals are those that can trigger allergic reactions,” said Malkan. “We have had many reports of people in stores who use these products who have had watery eyes, headaches and just can’t stand being in there.”

In 1999, the European Commission’s Scientific Committee on Cosmetic Products and Non-Food Products released a list of well known and frequently used allergenic substances. Europe requires that those substances be listed on all the labels of products when they exceed 10 parts per million. The United States has no such requirement.

Giorgio Armani Acqua Di Gio contained 19 sensitizing chemicals, the most of any fragrance tested for the Not So Sexy report. 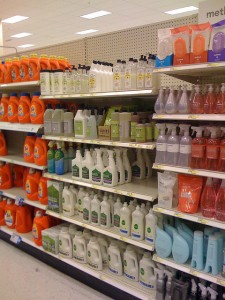 Fragrances are prevalent in many products. Photo by Adria Richards via Flickr.

These chemicals are prevalent throughout the fragrance industry however and included as ingredients in products such as laundry detergent, air fresheners and more, according to Steinemann.

Twelve hormone disrupters, an average of 4 in each product, were also found in the fragrances tested in the Not So Sexy Report. Halle by Halle Berry, Quicksilver and Jennifer Lopez’s J.Lo Glow all contained seven hormone disrupting chemicals. The chemicals have been known to disrupt estrogen levels in women and androgen levels in men. Some are also linked to thyroid problems, breast and prostate cancer and obesity.

One of the most prevalent hormone disrupters discovered in study was diethyl phthalate or DEP, a chemical known to cause abnormal genitalia in baby boys and sperm damage in adult men. The Environmental Working Group and the Campaign for Safe Cosmetics found DEP in 12 of the 17 fragrances tested for the report.

Recent research has linked DEP also to Attention Deficit Disorder in children, according to the Not So Sexy report.

DEP is often used to make the fragrance stick to the subject longer, according to the Environmental Working Group and Campaign for Safe Cosmetics.

To make fragrances last, manufacturers often add UV-chemicals found in sunscreens.  When fragrances are exposed to sunlight and air, they can break down. UV absorbing chemicals are used to prevent them from weakening.

But these chemicals are also particularly potent hormone disrupters.

And approximately 76 percent of the fragrances tested in the Not So Sexy report contained at least one of them.

Oxybenzone is one of the most common active ingredients in sunscreen, according to the Environmental Working Group. However, the chemical has been known to be an endocrine disrupter and to interfere with estrogen and androgen hormones.

The Food and Drug Administration and the Consumer Products Safety Commission oversee most cosmetics. However, the FDA does not have the authority to require manufacturers to test fragranced products before they enter the market.

“There is no pre-market testing required; the FDA does not test these products and they rely on companies,” said Stienemann. “It’s a self regulating industry, the industry is regulating themselves and they decide what to put on the labels.”

A lack of regulation leaves consumers at a disadvantage, according to the Campaign for Safe Cosmetics.

“Whether people are allergic to specific ingredients, or just looking to minimize their exposure to potentially harmful chemicals, they deserve regulation that would increase transparency and quality of the ingredients,” said Brown.

The prevalence of fragrance

In addition to colognes and perfumes, the scent of laundry detergents and dryer sheets affect many people. They may even cause some people to have seizures when dryers are vented outdoors, Steinman said.

Many ingredients accumulate in blood and body tissues. For example, the hormone disrupter diethyl phthalate is found in 97 percent of all Americans, according to the Campaign for Safe Cosmetics and Environmental Working Group.

Musk ketone, a common musk fragrance used in perfumes and colognes has also been found in fat tissue and breast milk. For example, synthetic musks such as galaxolide and tonalide, originally derived from the musks of deer and ox are found often.

In 2009, the Environmental Working Group reported that other musks have been found in the cord blood of newborn babies.

In Steinemann’s study of 25 of the most commonly used fragranced products that discovered 133 VOCs emitted, almost half of them were labeled “organic,” “natural,” and “non-toxic.” According to her, they are not any safer.

“Fragrance free does not mean non-toxic,” said Steinemann. “You can remove a lot of the hazards but many of them still have toxics as the base.”

Although essential oils are often used as an alternative fragrance in “natural” products, Steinemann warns of their toxicity as well. They also emit Volatile Organic Compounds and can produce the same sensitivities and reactions.

Before Michelli said she used to travel often. She flew on airplanes and stayed in hotels. She went to the movies and out to eat. She went to work.

But all of that has changed.

“I don’t travel for fun anymore, because it is just not fun,” said Michelli. “I don’t go to the movies and sometimes in restaurants, I have to get up to leave.”

Michelli calls ahead to hotels to make sure that no fragranced laundry detergent are used for the bed linen.

“I hope that people start to understand better how it can affect them and others, because no one gets a choice when it is used out in public,” said Michelli.

Michelli recently had to shampoo her carpets after a maintenance man left behind fragrances in the material.

She asks visitors if they use fragranced products before allowing them in.

“This really isolates people,” said Michelli. “It makes you angry and it makes you frustrated; I don’t think it is fair or right.

“It’s like I am running the gauntlet everyday,” said Michelli. “But there are so many people like me that are in this same battle.”