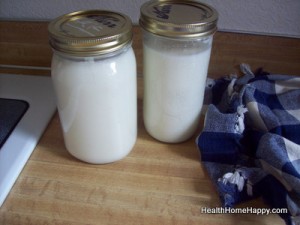 Got milk? Unpasteurized milk, that is.

Whether consumers should be allowed to purchase unpasteurized milk has been a hot topic in Michigan for years. Although its sale is illegal in the state, the debate over its availability and health risks is ongoing.

There’s no pending legislation to permit its sale, but farmers can legally provide unpasteurized milk through so-called “herd share” agreements.

Herd sharing is an arrangement where consumers pay farmers a boarding fee, which makes them partial owners of the cows and gives them the right to their milk.

More than 50 Michigan farms, including ones near Kalamazoo, Grand Rapids, Clarkston and St. Johns, sell herd shares to customers who want unpasteurized milk, according to the Weston A. Price Foundation, an organization that promotes raw milk.

But due to legal uncertainties over herd sharing, some participating farmers choose not to be publicly identified.

“It’s a touchy subject,” said Fae Presley, a Marquette chapter leader of the foundation. “There are farmers in the Upper Peninsula doing shares. Farmers are concerned that if there’s any legal difficulty, they may lose their farm.”

Presley said farmers who offer shares to the public are generally found by word-of-mouth. But it isn’t finding customers that’s an issue – many of them have difficulty meeting the demand for raw milk.

Since it’s produced on smaller farms, unpasteurized milk is typically available to herd share customers at quantities of one or two gallons per week. Many farms have waiting lists for their shares, and consumers such as Presley travel as long as two hours to buy milk.

The workgroup discusses how consumers should have access to unprocessed milk and is exploring whether herd sharing will allow small farms to develop a lucrative revenue stream.

For farmer Bob Sprong of Cradle Knoll Farm in Bliss, herd sharing was a last resort.

After 10 years of producing Grade A milk, the Michigan Milk Producers Association told Sprong it could no longer pick up his milk, making herd shares for unpasteurized milk his only option.

Elaine Brown, executive director of the Michigan Food & Farming Systems and member of the workgroup, estimated that 10,000 people in Michigan drink raw milk.

Even so, the debate over potential health risks and benefits is ongoing, she said.

Advocates argue that pasteurization, the process of heating milk to a specific temperature to kill pathogenic bacteria, strips milk of nutrients and enzymes.

“Many people have found they are able to thrive on it. I like all the natural goodness,” she said.

But according to John Partridge, associate professor of food science and human nutrition at Michigan State University, there’s no scientific proof of such benefits, and the risks may be severe.

“The risk for a healthy individual is minimal, but it can be serious for the very old and the very young,” he said, noting the dangers for consumers with weak immune systems. “For a healthy, robust individual making a choice on their own, if they’re willing to take a risk of a little salmonella, that’s the choice they make.”

“The issue is that you have a product that has bacteria. You can’t see the bacteria to be sure there aren’t any pathogens in it,” he said.

According to the Food and Drug Administration (FDA), raw milk may contain pathogens such as e. coli, listeria and salmonella.

Currently, Michigan has no regulations that require individual farmers to have their raw milk tested for pathogens.

Beals said a process called competitive exclusion naturally fights off the bacteria in raw milk. In the process, beneficial bacteria push harmful bacteria out of the milk, ridding it of pathogens, he said.
Partridge counters that the bacteria levels in milk aren’t high enough for that process to occur.

“I’m not going to sit and condemn people for drinking raw milk,” Partridge said, “but the data on outbreaks related to raw milk is relatively eye-opening.”

According to the FDA, from 1998 to 2008, a total of 85 outbreaks of multiple human infections resulting from consumption of raw milk were reported to the Centers for Disease Control and Prevention. Those outbreaks included 1,614 reported illnesses, 187 hospitalizations and two deaths nationally.

In April, Michigan health officials reported that 13 people in Cass County became ill with a bacterial infection called campylobacter after consuming unprocessed milk from a farm in Indiana.
Organizations such as the Michigan Farm Bureau and the milk producers support the FDA’s stance that it’s unsafe to consume raw milk.

“The current system is the best process that’s out there,” said Ernie Birchmeier, livestock and dairy specialist for the Farm Bureau. “It’s important that you truly are marketing that product based on truthful information and not perceived information.”

Sprong, the Bliss farmer, said he hopes to one day expand his production but won’t be able to until the misconceptions about raw milk dissipate.

“I’d like to be able to take my milk to farmer’s markets,” he said.

To Presley in Marquette, the decision to drink raw milk should be one consumers make, not the government.

4 thoughts on “Should the government or consumers weigh risks and benefits of raw milk?”