Thousands of years ago deer mice crossed the Great Lakes and into Michigan’s freshly glacier-free landscape.

It was a surprising feat that scientists discovered by analyzing DNA, according to research published recently in the Canadian Journal of Zoology.

But it’s one unlikely to be repeated as a warming climate pushes the mice and other mammals northward to be trapped at the tip of Michigan’s mitten.

Those mice won’t be able to pull the same trick as their ancestors and move into new habitat with a more suitable climate.

The problem: The lakes are much wider than when the earlier mice and other mammals made their move.

The big barrier to mouse migration could also influence the flow of genes – and the helpful traits that come with them, said study author Zac Taylor, assistant professor of biology at Thomas More College in Kentucky.

“What you end up with is this trapped group of mice on the Lower Peninsula that’s not able to either physically move north through migrations or exchange genes with populations that are farther north,” Taylor said. 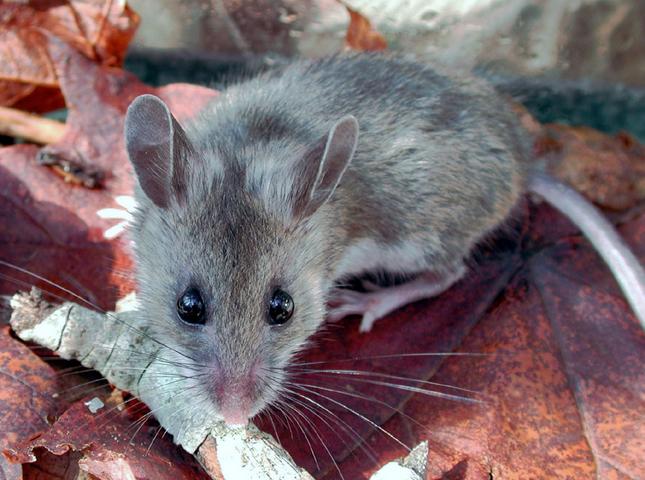 Deer mice apparently crossed the lakes on the way into Michigan. Now the lakes could trap the mice, which are in the midst of a migration induced by climate change. Photo: Phil Myer

The research is important because it indicates how global warming could conspire to limit the gene pool of certain animals with grave consequences for their long-term survival.

“Normally we think of it as neutral to bad,” he said. “Natural selection starts to break down so you can start to lose beneficial traits and properties.”

The question of what happens when migrating animals run into the Great Lakes came up after a 2009 study of trapping records and museum specimens showed that deer mice and other small mammal species throughout Michigan have been moving north.

The best explanation for the shift is climate change, Taylor said.

“It changes the length of the winter and the he severity of the winter,” he said. “As that’s happened, there have been a lot of changes going on in the small mammal community.”

To find out what kind of barrier the Great Lakes will be to migrating species,the researchers looked at how animals have dealt with them in the past.

That led to DNA testing of deer mice in Michigan, Wisconsin and Ontario to see how closely groups from different areas are related. That can give scientists an idea of the routes the mice took to get to where they are now.

Taylor said that he expected that the mice would have taken simple routes around the Great Lakes, which would have looked something like this:

Those paths are simple because none require lake crossings. They are also well traveled.

Garter snakes took the same routes when they first moved in to the Great Lakes region, according to a 2006 study led by John Placyk, a biology professor at the University of Texas at Tyler and lead author of the snake study.

“I’ve actually seen that with a variety of different species,” he said, including frogs and other kinds of mice.

But the deer mice DNA tells a different story. They took a wetter route.

“It looks like from some of the finer genetic patterns that they actually managed to cross the lakes at different points and settle all those different areas,” he said.

Scientists can only guess how the mice made it across the lakes, but one explanation lies in how the land has changed over the past several thousand years.

“If they came in the last 10,000 years, they might have just had to swim across something that was only a kilometer wide,” said Placyk. “Even 8,000 to about 6,000 years ago you had a pretty narrow river in some locations.”

That kilometer (about a half mile) trip, which the mice may have made by clinging to a hunk of driftwood, would be a lot easier than crossing the four miles of water that separate Michigan’s peninsulas today.

Not only do the mice have more water to cross, they have less time to do it, Taylor said.

“Temperatures are changing really quickly and the mice are rearranging where they’re found in this region,” he said. “They don’t have 10,000 years to get from one place to another.”