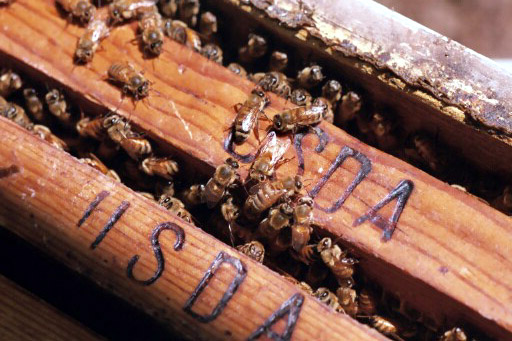 LANSING – Beekeepers are buzzing about a disease that threatens the state’s beekeeping industry: colony collapse disorder.

The disorder, known as CCD, is a scientific mystery in which bees suddenly disappear from their hives, leaving beekeepers empty-handed.

“In September and October, a beekeeper will have a lot of bees and by early December they’re all gone,” said Roger Hoopingarner of Holt, president of the Michigan Beekeepers Association. “We don’t know the cause.”

Michael Hansen, a bee specialist at the Department of Agriculture, said the problem is already a “huge threat,” but Michigan is in a fortunate position.

“Beekeepers can go south in the winter, rebuild their colonies and come back,” Hansen said. “But beekeepers can’t lose 30 percent of their population every year and still be economically viable.”

Michigan crops that rely on bee pollination include blueberries and apples. Many commercial beekeepers have pollination contracts to rent their colonies.

Hansen said there are large research projects going on nationwide to determine the causes of CCD. Most of the studies follow migratory operations since they’re affected the most by the disorder.

Hansen said there’s not a single cause.

“A while ago, viruses on their own were not a problem,” Hansen said. “Now there may be synergism between the viruses. It’s not one problem, but a number of things working together that cause CCD.”

“We don’t know what causes it, so there’s no way to fight back,” Huang said.

Hoopingarner said there are half as many beekeepers in Michigan as there were 25 years ago. A beekeeper near Lansing lost 2,300 colonies last fall, he said.

Beekeepers don’t have to register, but Hansen estimated the state has between 1,200 and 1,500 beekeepers and about 100,000 bee colonies in the summer. Hansen attributes the decline over the past two decades largely to the introduction of tracheal and Varroa destructor mites in the 1980s, critters that ravage bee colonies and may be CCD contributors.

Hansen said there were 6 million colonies 25 years ago. Now, there are about 2.5 million. “Lots of beekeepers lost bees and lost interest.”

Roger Sutherland, president of the Southeastern Michigan Beekeepers Association, has been keeping bees for 43 years.

“The first half of that time was great,” Sutherland said. “In the 1980s, there started to be one problem after another, starting with parasitic mites.”

Huang said beekeepers mostly use chemicals to control the Varroa mite, but other bee management techniques include sugar dusting and non-chemical methods.

“New beekeepers are learning how to combat disease,” Huang said.

Hansen also said there’s a growing interest in beekeeping as a hobby, with lots of people picking it up and keeping only a few colonies.

“Some people are doing it for nostalgic reasons because they’ll remember grandpa kept a few colonies,” Hansen said. “Some people realize it’d be fun to do with their kids or see their neighbors having a good time with it. People going in now know they have to control mites.”

A new group called City Bees Detroit is teaching hobbyists how to keep bees in the city, according to Hansen. “They talk about how to develop a honey crop, how to work with city hall.”

Sutherland said the Southeastern Michigan Beekeepers Association has 350 members and is growing. The majority are small-scale beekeepers.

“Some just want to help the environment,” Sutherland said. “Some want a hobby that might also be a source of income later on. Lots of our members have home gardens or fruit trees and realize pollination would be of great value to them.”

Sutherland said his members are experiencing a lot of bee loss but don’t see the symptoms of CCD.

“Our bees are dying the ordinary way,” Sutherland said.

Sutherland said the honeybee lacks a good immune system and the management of commercial bees has changed significantly in recent years. He said moving bees to the south every winter is hard on the colonies.

“Bees are being asked to do a lot more these days,” Sutherland said. “It’s putting stress on the bees. They’re more likely to fall victim to virus.”

Hoopingarner said some Michigan beekeepers combat CCD by going south in the cold months. “Beekeepers will go to Georgia or Florida or some other state, divide their colonies to get good ones and bring them back in the spring.”

Many other commercial beekeepers in Michigan transport their bees to warmer climates during the winter.

“They’re in California right now and they’ll be back to pollinate apples in April, blueberries after that and vegetables all summer long,” Hansen said.

Hansen said beekeepers with CCD in the fall build up their colonies by the spring to be able to fill all their pollination contracts. He said the state is meeting its pollination needs, but the disorder does affect individuals.

However, Hansen predicted that CCD won’t be a long-term problem if researchers continue to study good honeybee nutrition and different management techniques.

“We’re starting to whittle away at a larger problem,” Hansen said. “We’ll come out of this.”