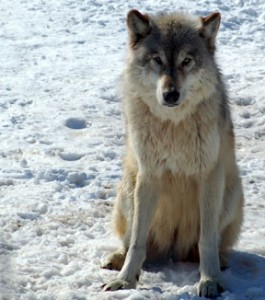 A captive gray wolf at the Wildlife Science Center in Minnesota.

LANSING, Mich. — The Michigan Department of Natural Resources and Environment is surveying the Lower Peninsula to find out how many gray wolves the Mitten holds.The  agency confirmed two wolf observations last year in the northern Lower Peninsula. Greg Wright, a wolf specialist at Michigan Technological University, said they were probably lone dispersers who were unable to set up a territory.

“I don’t expect they will find a significant number of wolves in the Lower Peninsula in this year’s survey because there is not a breeding population there,” Wright said.

Dennis Fijalkowski, Michigan Wildlife Conservancy executive director, said wolves have been in the Lower Peninsula for 20 years and there have been credible sightings in Roscommon County. A pilot sighted a wolf pack crossing the ice from St. Ignace 12 years ago, he said.

“I have every suspicion they’re moving south,” Fijalkowski said.

Brian Roell, a state wildlife biologist in Marquette, said the gray wolf has gone back and forth on the endangered species list four times in the past 40 years.

“It’s hard for us as far as management, and it’s eroding the public support we once had for wolves,” Roell said.

Roell said the change of the wolf’s endangered status has mostly been due to efforts by the U.S. Humane Society to protect the animal. Roell said the wolf should be taken off the list because it’s met the federal requirements for delisting.

“We’re reaching the social carrying capacity,” Roell said, referring to how many wolves the public is willing to tolerate.

Gray wolves are a non-game species, and even if they were removed from the endangered species list, they could not be hunted legally, Roell said.

The U.S. Fish and Wildlife Service investigated 16 illegal wolf killings across Minnesota, Wisconsin and the UP in January.

Wright said there is no definite figure on how many wolves Michigan can sustain, but said he thinks the state can support current populations. The number of prey, amount of vacant land, disease and human tolerance are all factors.

“In many areas where wolves and humans live together, human-caused mortality is the main reason for wolves dying,” Wright said, citing Isle Royale National Park in Lake Superior, which has no permanent residents, as an exception.

Fijalkowski said he doesn’t think wolves moving into the Lower Peninsula will cause a threat because of the large amount of wild prey.

“In a state with 1.8 million deer, I can’t see it being much of a problem,” Fijalkowski said. “We have three to four times the density of deer in the Lower Peninsula than the Upper Peninsula.”

Roell said 577 wolves were counted last year in the UP, but he expects the number to grow by about 10 percent.

Roell said there have been incidents of wolves preying on farm animals and pets in the UP, but they are uncommon.

“We certainly do have livestock depredation and some domestic pet depredation,” Roell said. “About 5 to 6 percent of farmers are affected.”

Wright said wolves prefer wild prey, but there can be problems when pups learn to feed on domestic livestock or lone wolves get too old to bring down wild prey.

“Wolves aren’t killing dogs out of a vicious streak but because they’re genetically hard-wired to view other canines as competition,” Wright said. “Wolves often kill other wolves from neighboring packs for trespassing into their territory because they’re basically defending their ‘supermarket.’”

Roell said farmers protect their livestock from wolves with non-lethal methods like noisemaking devices and strobe lights. Husbandry practices also must be taken into account, he said.

“Things like making sure animals that go down are properly buried and maybe moving cows that are calving up to the barn,” Roell said. “Guard dogs are good, too.” Amy Spray, resource policy specialist for the Michigan United Conservation Clubs (MUCC), said the organization recommends taking the gray wolf off the endangered species list.

“In this case, the Endangered Species Act has worked,” Spray said. “The wolf population has come back and even overshot goals.”

Spray said MUCC would favor a hunting season on the wolf, which would require a change in legislation.

Fijalkowski of the Michigan Wildlife Conservancy also said while wolves in the Lower Peninsula need a place, the state needs to enforce management practices for wolves that don’t behave.

“If you don’t have a safety valve and the ability to take out animals that are killing livestock, there will be no respect for these beautiful animals,” Fijalkowski said.

However, Wright of Michigan Tech said the state must take precautions when managing wolves because they play an important role in keeping ecosystems healthy, and that public education is key in wolf management.

“All those fairy tales, fables and the like have created a wolf in the imagination that is very different from the real wolf living out its life just trying to find a mate, raise pups and kill enough prey to survive,” Wright said.

Michigan officials are asking the public to report all wolf observations to its Gaylord Operations Service Center through March 12.