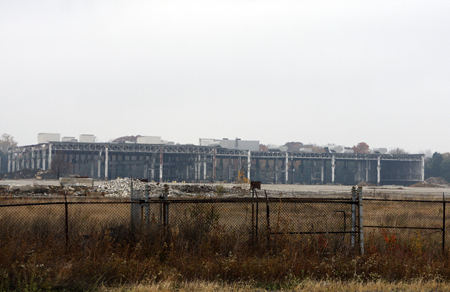 The Lansing Craft Centre is one of dozens of environmental cleanups that GM could dodge or shortchange through bankruptcy. Photo: Brian Laskowski

Editors note: This is part one of a three-day series on the environmental implications of GM’s bankruptcy.

The money set aside to clean up pollution at 120 sites a bankrupt General Motors left across the country may be enough to address the sites in only two states, according to court records.

And that estimate ignores dozens more sites across the country that GM polluted, but either gave away or never owned — sites even less likely to get any cleanup money through the bankruptcy.

GM entered a government — engineered bankruptcy aiming to emerge as a new, leaner company with fewer factories, dealerships and employees. It shed around 120 properties, including office buildings, factories and vacant lots.

Many of those are polluted and require millions of dollars to clean up. That’s a task left to Motors Liquidation Co., the bundle of old GM debt and real estate that the automaker abandoned through bankruptcy.

Just which sites win this cleanup sweepstakes and which are left to fester is uncertain as those living nearby watch bankruptcy lawyers sort it out. The fact that any of the sites will benefit is unusual.

A $1.17 billion loan backed by the U.S. and Canadian governments is the only reason environmental cleanups of GM’s old sites are guaranteed money. Motors Liquidation will use around half of that loan to clean up its polluted properties, and the rest to pay lawyers, accountants and consultants.

A pot of money aimed at a bankruptcy’s environmental aftermath is a rare luxury, said Joe Dufficy, chief of the U.S. Environmental Protection Agency’s regional brownfield and Superfund reuse section.

“The fact that money has been laid down to do remediation is a big help,” he said. “Very, very few bankruptcies ever have that.”

But there’s still plenty of reason for worry.

Motors Liquidation wouldn’t comment for this story, but the Financial Times reported in November that the company estimates environmental cleanup costs for its 120 properties at less than $450 million.

But 42 sites — that’s just more than a third on the list — in Indiana and Michigan alone would take at least $400 million to clean up, according to bankruptcy court documents provided by those states.

That would leave only $50 million for the other 80 sites.

Fifty of those sites are in Bedford, Ind., and only one or two are polluted, said Jose Cisneros, chief of the region’s EPA reuse and remediation branch.

“The folks here aren’t too worried about it,” he said.

But that’s just on the cleaner side of the ledger.

Pollution at one site in Massena, N.Y. could take $260 million to clean up, said Jason Clark, the city’s director of economic development. PCB contamination there from a former GM factory runs so deep under the building that the EPA can’t even measure it, he said.

Though Massena may not get all of the money it needs, it will likely get something because it’s on the list of 120 properties that Motors Liquidation owns.

But there is another category of sites that GM polluted that won’t see a dime. Neither Motors Liquidation nor the new GM own all the property the automaker polluted. Those unowned sites aren’t part of the bankruptcy estate. They aren’t likely to see any of the cleanup money Motors Liquidations sets aside.

They might have seen cleanup dollars from a thriving General Motors. Now other industries will have to pick up an even greater portion of the tab for cleaning sites with liabilities they had shared with the automaker.

“(Motors Liquidation) has liabilities for the sites that it owns and operated,” said Brian Monroe, chief of the Michigan Department of Environmental Quality’s redevelopment and enforcement unit. “Claims related to those sites get an overall higher priority.”

The unowned sites are mostly landfills. Federal environmental and wildlife agencies seek cleanup costs for 50 of these sites across the country, according to documents filed by the government in the U.S. bankruptcy court in New York handling the GM case.

The landfills fall under the federal Superfund program, which covers abandoned hazardous waste pollution. The U.S. EPA, Fish and Wildlife Service, and National Oceanic and Atmospheric Administration have already spent $190 million working on these sites. They say they’ll need another $1.8 billion to finish the job.

Only a fraction of those costs were supposed to come from GM. Cleanup costs at Superfund sites are split up among all the companies that the EPA can prove polluted there. Some landfill sites have as many as 170 other parties sharing cleanup costs with GM, according to the EPA.

But others have fewer than 10, and if GM or Motors Liquidation can back out of their commitment to fund those cleanups, the other parties have to pick up the slack.

Of the 50 landfill and dumping sites, 32 are in the Great Lakes states, where the EPA estimates it will need another $305 million to cover past and future cleanup costs.

Now that the state and federal governments have submitted their cleanup cost estimates, the governments and Motors Liquidation will negotiate a compromise, Monroe said.

Those negotiations will run through February and March, he said. Motors Liquidation aims to have a plan for cleaning up and selling off the properties it owns by spring.