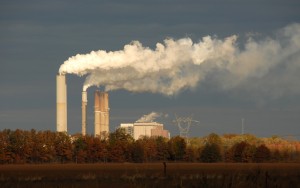 The Gibson Generating Station in Indiana had to close fishing at its lake due to high selenium concentrations in the fish. Photo by Bill McCoy, U.S. Fish and Wildlife Service

Gibson Lake, built by one of the world’s largest coal-fired power plants to store wastewater, has attracted birds and fishermen to its shores for years.

But after years of wastewater discharge, the Indiana lake contains high levels of selenium that threaten hundreds of species of birds, including the endangered least tern, and render fish unsafe to eat.

Selenium is an essential nutrient, but in wildlife and people excess amounts can be dangerous.

As with mercury, selenium monitoring and regulations are spotty across the Great Lakes region. That may soon change.  The U.S. Environmental Protection Agency is preparing new rules to clean up, and possibly eliminate, the wastewater.  But it will be at least five years before the rules take effect.

The EPA recommends selenium concentrations in water stay below 5 micrograms per liter to protect aquatic life.  But agency records indicate that few power plants even monitor for selenium.  There are 155 coal-fired power plants in the Great Lakes states — 25 monitor for the mineral.  And of those that do, most discharge concentrations far greater than the water quality standards.

Pennsylvania permits the EME Homer City Generator power plant to discharge selenium concentrations 320 times greater than the EPA’s standard, according agency data.  And even with one of the most generous discharge limits in the region, the plant violated its permit nine times over the past three years. But while the power plant has never been fined under the Clean Water Act, Pennsylvania fined the plant $200,000 in for violating selenium limits.

“There has been an attitude among the EPA and other agencies that selenium doesn’t have to be regulated” said Abigail Dillen, an environmental attorney for Earthjustice.

This is definitely not true, she said.

Selenium is an essential nutrient, but excess amounts can wreak havoc on wildlife.

“For selenium, that boundary between … the optimum amount that you actually need and stepping over that line to toxicity is just a knife edge,” said Marjorie Brooks, an assistant professor in the zoology department at the University of Southern Illinois and coeditor of an upcoming book about selenium in aquatic environments.

Selenium occurs naturally in coal and is especially prevalent in bituminous coal, which is burned mostly in the eastern United States.  As with metals, selenium enters the wastewater from scrubbers and ash ponds.

Once in the water, selenium can start causing problems.

It builds up in animal tissues, so animals higher up the food web end up with more in their systems. Selenium poisoning caught national attention in the 1980s when agricultural runoff was responsible for a massive wave of bird deformities and fish kills in the Kesterson National Wildlife Refuge in California. 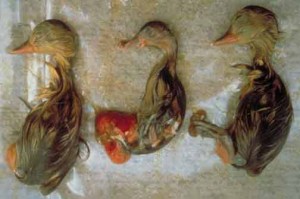 Selenium can cause deformities in birds. The ducks on the left were exposed to high concentrations of selenium in the Middle Green River Basin in Utah. Photo by Bruce Waddell, U.S. Fish and Wildlife Service.

In 1985, the power plant switched to dry waste disposal. The selenium concentrations in the fish declined dramatically, but the fish were still being harmed ten years later. Although recent fish counts showed that diversity returned to normal, no one has looked for other ecological effects.

“The question I have is what are the selenium concentrations in those fish and is there any residual effect that might have been in the sediments and incorporated into the food chain after all these years?” Lemly said.

Selenium troubles aren’t just relegated to lakes.  Fish downstream of a West Virginia coal-fired power plant accumulated selenium and metals in their tissues, according to another study by Lemly.

“Coal ash poses a hazard no matter where it is or how it’s disposed of,” he said.

“(For coal wastewater) we do need to be really vigilant about how much is there and how much is leaching into the system,” Brooks said.

The Great Lakes region isn’t immune to complications from selenium.

Duke Energy’s Gibson Generating Station in Gibson County, Indiana, is one of the power plants that has drawn the EPA’s attention as it drafts new wastewater regulations. Rather than rely on the nearby Wabash River for its plant, which serves Indianapolis and nearby areas, Duke Energy constructed a 3,000-acre lake in the 1970s to use as a cooling pond and to store its waste. The lake was closed to fishing in 2007 because selenium concentrations in the fish exceeded levels safe for subsistence fishing. 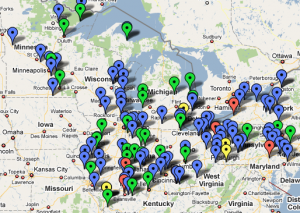 But the trouble didn’t end with the fishing closure.  Gibson Lake attracts many birds – including the endangered least tern as well as bald eagles, peregrine falcons and pelicans.

This year, 220 terns bred at the lake, a record number.

But bird eggs at the lake contain high selenium levels, which can prevent eggs from hatching, said Scott Pruitt, field supervisor at the Bloomington office of the U.S. Fish and Wildlife Service. Biologists there are trying to determine if the terns’ reproduction is being harmed. So far, no action has been taken under the Endangered Species Act. “You can’t take action over concern,” Pruitt said. “You have to take action over proper scientific evidence.”

To provide an alternative habitat for the birds, the power company in 2008 paid to pipe water from the Wabash River into the nearby Cane Ridge Wildlife Management Area, part of a federal refuge which previously received water from Gibson Lake with unacceptable levels of selenium. Many bird species, including 50 least terns, returned to Cane Ridge this year, but many birds still use Gibson Lake.

In addition, another contaminant, boron, leached from its ash ponds in 2007 into the drinking water of a nearby town, East Mount Carmel.

The company has been voluntarily working with federal officials to address the selenium problem, although it contends that the Clean Water Act does not apply to its manmade lake.

“We discharge into our cooling lake as a way to avoid having to release into a natural water body,” said Eric Myers, Duke Energy’s director of environmental health and safety policy.  “We actually built that lake.” EPA officials said they have not yet determined whether the lake falls under the jurisdiction of the federal law.

Elisabeth Pernicone contributed to this report.

Tomorrow: Cleaning up air could harm quality of water.