7
SHARES
Click each park to see its threats. View Great Lakes Parks in Peril in a larger map

Indiana Dunes National Lakeshore is among U.S. national parks most vulnerable to climate change, according to a recent report.

The park on the southern end of Lake Michigan faces an increase in flooding, overcrowding and air pollution and a loss of wildlife, plants and fish.

Other parks in the Great Lakes region are also at risk of these effects.

Climate change is the greatest threat to U.S. national parks, according to the Rocky Mountain Climate Organization and the Natural Resources Defense Council. The report by the two organizations named Indiana Dunes among the top 25 national parks most vulnerable to the effects of climate change.

Climate change, also known as global warming, is advanced by the burning of fossil fuels for transportation, power production and industrial development.

“National parks contain and represent our very best natural and historical resources, and these places are going to show the impacts first,” said Stephen Saunders, president of the Rocky Mountain Climate Organization, a group studying climate disruptions in the west. “Every park in every region of the country will eventually be affected.” 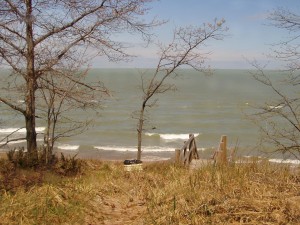 The climate organization and defense council studied the effects of climate change on parks throughout the U.S. “We picked parks around the country to report on, based on the severity of the impacts we saw from our research,” said Tom Easley, director of programs at the climate organization. “The dramatic drop in Great Lake water levels caught our attention, as well as reports of changing ecosystems.”

Other parks picked as most vulnerable include the Everglades, Yellowstone and Yosemite national parks.
“There is such a huge amount of plant diversity in Indiana Dunes,” Easley said. “This would be affected so drastically and would in turn affect many ecosystems.”

Officials from Indiana Dunes recently requested funding for climate change research from the National Park Service. They want to study the endangered Karner Blue Butterfly and the federally threatened plant, the pitchers thistle. A request was also made to study the effects of climate change on the migration patterns of the park’s bird species.

“Climate change is taken very seriously here,” said Bruce Rowe, park ranger at Indiana Dunes. “It is certainly an area we are concerned about and want to look into through research.”

According to the report, 60 percent of all species worldwide will respond to climate change by altering migration patterns and habitats. Easley noticed that various ecosystems are responding to warmer weather in similar ways.

“Forests and all types of plants and wildlife will all be moving northward,” he said. “In the west, we are seeing forests move up, and in the Midwest, it looks like they will be moving upward as well.”

As temperatures increase, researchers say visitors will also flock to northern parks and cause overcrowding. Indiana Dunes and Sleeping Bear Dunes National Lakeshore are two parks along Lake Michigan at risk of this effect, according to the report.

“Our visitation tends to rise and fall during our summer season, based on temperature,” Rowe said. “But it is too soon to really see climate change effects on visitation.”

Greater numbers of people and vehicles on the grounds can put stress on the natural resources of the parks. Carbon dioxide from vehicles can cause increased levels of air pollution.

Some researchers already cite low lake levels as a reason for national parks in the Great Lakes region to worry.

“In terms of loss of water, in 2007, Lake Michigan was at a particularly low state,” Rowe said. “We certainly notice this change and keep track of how it affects the size of our beaches.”

“It is unclear how much climate change will affect Lake Superior, but projections seem to be from a few inches to perhaps three feet,” said Gregg Bruff, chief of heritage education at Pictured Rocks. “Recreationally, this will bring more difficulty with launching boats at ramps.”

Loss of fishing will also affect recreation in national parks. Rise in water temperature is expected to decrease salmon, trout and chinook populations throughout the Great Lakes.

Shorter winters and loss of snow will also reduce the possibility for winter activities.

“We used to have a lot of snow,” said Mark Romanski, biological science technician at Isle Royale. “We now have warmer Novembers, which means we are getting less snow and more precipitation.”

The report includes 32 recommendations to reduce the impact of climate change on national parks, lakeshores and monuments.

“I think we should regard this as the biggest threat there has ever been to national parks, in terms of their ecological integrity,” Easley said. “We are quite optimistic however that things can be done to mitigate these effects.”

The report shows effects of climate change are more local than many think, Saunders said.

“National parks have a very specific part in the hearts of the American people,” he said. “What we are doing to our climate has effects not only on ice caps, but affects us close to home, in places we visit and cherish.”

2 thoughts on “Report: Climate change greatest threat to national parks; Indiana Dunes among most at risk”