Supporters of a climate change bill targeted members of Congress from the eight Great Lakes states with campaign cash to get the measure through the House last June. 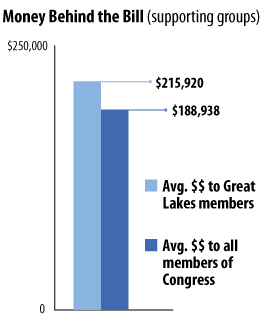 On average they gave $215,920 to each representative in the 125-member Great Lakes delegation since 2003, according to the Center for Responsive Politics, a non-profit and non-partisan research group that tracks money in U.S. politics.

That’s substantially higher than the $188,938 average for all of Congress. Great Lakes delegates who voted against the bill received $41,000 more on average than their national counterparts; the region’s delegates who supported the bill received $15,000 more on average. (View your delegate’s vote and the money behind it.): PDF or Excel spreadsheet

That level of giving may be a clue to the role the region’s U.S. senators will play as the bill is set for debate this fall, said Hasan Nazar, a Washington lobbyist for the League of Conservation Voters, a national environmental group that contributed $1.5 million to congressional candidates during the 2008 campaign cycle, according to the center.

“Members from these states have had a big influence,” Nazar said.

“Industry there has been particularly impacted by the current recession and has been impacted negatively by the loss of jobs overseas for some time,” Nazar said.

The House bill would mark a radical change in the way the U.S. government regulates pollution. It caps emissions and creates a carbon-trading market allowing companies that can’t meet the limits to buy credits from companies that can restrict emissions even more.  The legislation aims to cut the country’s greenhouse gas production 17 percent by 2020, and 83 percent by 2050. It includes provisions to create alternative energy sources, cleaner technologies and more-efficient building standards. 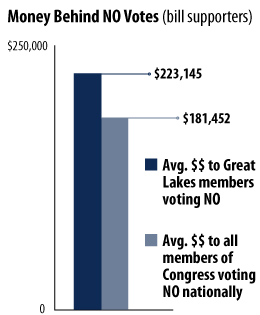 The clout of many of the Great Lakes members of Congress could factor into why they attracted more contributions than the national average, Nazar said. Great Lakes delegates chaired four of the nine committees that approved the bill before sending it to the full House, including Minnesota’s Collin Peterson (agriculture) and James Oberstar (transportation and infrastructure), Wisconsin’s David Obey (appropriations) and New York’s Charles Rangel (ways and means).

Those four lawmakers have received $1.3 million since 2003 from groups supporting the climate bill, which includes the environment and union groups one might expect. But surprisingly supporters also include multinational oil and gas producers, electric power and coal companies.

The Center for Responsive Politics uses public statements to categorize a bill’s supporters and opponents.

Some industries may support the bill because of changes made to weaken it, and because “it’s probably good to have industries be perceived as supportive of a clean energy bill,” said Dan Newman, executive director of the center’s MAPLight.org database, which connects campaign donations and legislative votes.

Of the region’s 125 members of Congress, only 10 do not hold a post in a committee that had jurisdiction over the bill. But even among those 10 are powerful members of Congress such as Rep. John Conyers, D-Mich.  who chairs the Judiciary Committee  and Minority Leader Rep. John Boehner of Ohio.  John Dingell, D-Mich., an auto industry favorite, chaired the Energy and Commerce Committee before being ousted in November by Henry Waxman.

California’s Waxman, along with Rep. Ed Markey of Massachusetts, authored the House bill, HR 2454. They made concessions for the coal and agriculture industries, and reduced carbon-emission-reduction standards to move the legislation through the House. 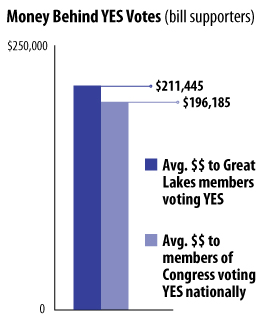 Now it’s up to the Senate to pass its version of the bill, which must then be merged with the House’s version in conference committee before making it to the president’s desk.

Nazar said Senate leadership, too, is sensitive to Great Lakes delegates’ concerns. Those interests will play a factor when the Senate marks up — and makes compromises on — its bill.

“There’s a great concern about what a clean energy and climate bill would mean to those states,” he said, referring to Illinois, Indiana, Michigan, Minnesota, New York, Ohio, Pennsylvania and Wisconsin.

A clean energy and climate bill could help those states by creating manufacturing and research-and-development jobs, Nazar said. That’s something that’s already beginning to happen, he said, pointing to General Electric’s plans to build a research, development and manufacturing facility for wind turbines in Detroit that would create about 1,100 jobs, according to the company.
But Great Lakes states wouldn’t be the only ones impacted.

“You’re going to see input from the south, the east and the west,” he said. “This bill will impact everyone in a certain way.

“If we do it right, it will create clean energy jobs that will keep jobs in the states, increase energy independence, and most importantly curb the effects of global warming.”

More Analysis:
–    While the climate bill squeaked by the House by a 219-212 vote, Great Lakes members of Congress supported the bill by a 72-53 vote. Although like the rest of the nation the vote broke along party lines, the region had two Republicans voting for and 11 Democrats voting against.
–    Five of the eight states’ delegations supported the bill overall, but Indiana, Pennsylvania and Ohio produced more nays than yays. (Ohio liberal Dennis Kucinich voted against the bill because “it sets targets that are too weak, especially in the short term … it gives new life to one of the primary sources of the problem that should be on its way out — coal — by giving it record subsidies.”)
–    In the reverse of a national trend, groups supporting the bill gave more on average ($223,145) to Great Lakes delegates who ultimately voted against the bill, than for it ($211,445).
–    Great Lakes delegates voted largely along party lines to help kill an amendment offered by J. Randy Forbes (R-VA) that would have replaced the entire climate bill (more than 1,400 pages) with a 21-page bill that would promote, through federal grants, development of alternative energy sources, including “a sustainable nuclear fusion” reactor. The amendment would have eliminated all provisions for a cap and trade market, efficiency standards and emissions regulations, according to the Center for Responsive Politics. See how your delegate voted (PDF or Excel), and money he or she has accepted from industries supporting the amendment (including oil and gas, coal and nuclear).