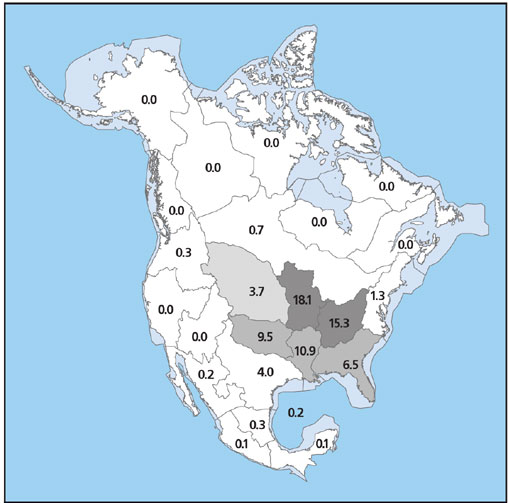 The largest, deepest and coldest Great Lake holds another distinction, – it has the highest levels of toxaphene found in the region and possibly anywhere in the world.

Since federal bans on persistent pollutants in the 1970s and 80s, most chemical concentrations have declined in the Great Lakes.

Some Great Lakes toxicologists say the same is true of toxaphene. But toxaphene in Lake Superior has increased by 25 percent since its ban in 1990, according to Mel Visser, a former environmental health safety officer and author of Cold, Clear and Deadly, a book that details the legacy of Great Lakes contaminants.

The insecticide has been shown to damage the immune system, nervous system, lungs and cause cancer. The principal human exposure comes from eating fish.

Superior has double the toxaphene concentration found in Lake Michigan and five times that found in Lake Ontario, according to a University of Minnesota study published in Aquatic Ecosystem Health and Management in 2004.

“It is so big and cold that [Superior} acts like a sponge for these contaminants in the atmosphere,” said Matt Simcik, a University of Minnesota environmental health professor and one of the authors of the study.

“Coming from outside the region, toxaphene is going to be the same source for all five lakes and because Superior is the biggest and coldest it is going to contaminate it the most,” Simcik said.

Most toxaphene arrives from the southern U.S., where it once was used to kill insects in cotton fields and unwanted fish in lakes, according to the Agency for Toxic Substances and Disease Registry. And the insecticide continues to migrate into the Great Lakes from other parts of the world where it is still produced.

Containing more than 670 chemicals, it was one of the most heavily used insecticides in the U.S. Nearly 40 million pounds were produced in 1977, according to the U.S. Environmental Protection Agency.

Since its ban in 1990, toxaphene has migrated north to Lake Superior. Entering the water by air, this chemical breaks down slowly, eventually accumulating in sediment and fish.

But as concentrations have increased, the advice given for what levels of toxaphene in fish are safe to eat have weakened, said James Clift, policy director for the Michigan Environmental Council, a coalition of environmental groups.

“I think people thought that once we started to see the concentration of toxaphene drop then we would have a handle on this, but that assumption was not correct,” said Clift.

When dealing with a pollutant that has over 600 chemicals, budget cuts create limitations, said Groetsch.

“The fish advisory [for toxaphene] is outdated and the problem is that the funding for it went away,” said Groetsch.

Changes in regulations over toxaphene are happening elsewhere in the region.

According to an Environmental Defense report, a Canadian environmental group, Health Canada raised the concentration that triggered fish consumption warnings from toxaphene from 1.6 to 1.9 parts per million in 2005. While levels deemed safe for dioxins, furans and PCBs decreased at the same time.

PCBs and dioxins have more restrictive consumption advisories because they have been driving more fish advisories recently, said Kate Jordan, spokesperson for the Ontario Ministry of the Environment.

The result was fish consumption advisories in Lake Superior caused by toxaphene dropped from 71 percent in 2003 to zero in 2007.

“It gives the appearance that toxaphene has been cleaned up from Lake Superior,” said Visser.

But Visser says that couldn’t be farther from the truth.

The Environmental Defense report “Up to the Gills” gives two explanations – either toxaphene was eliminated or the decrease in allowable concentrations of other chemicals caused the dramatic drop in toxaphene driven fish advisories.

Groetsch and other scientists are working out new methods to look at specific chemicals in toxaphene, the ones that predominantly accumulate in fish and people, to provide a more precise fish consumption advisory.

But to ensure environmental and human health from persistent pollutants like toxaphene, only an international ban will do, Clift said.

“Regional bans and regulations are not protective enough, the major step that needs to be taken is for international treaties to outlaw toxaphene and others like it globally,” Clift said.